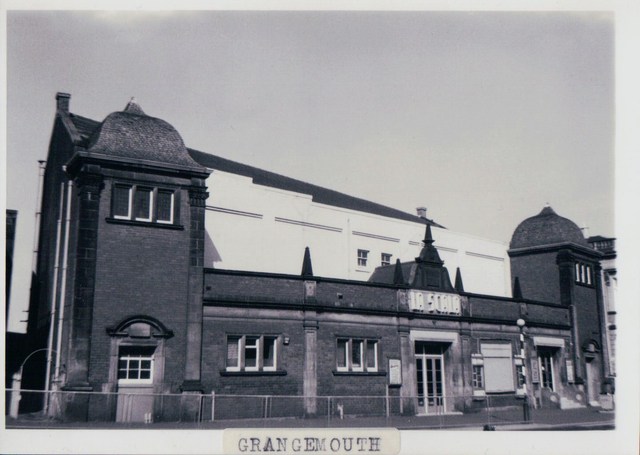 Located at Charing Cross at the corner of B'ness Road and Station Road in Grangemouth. Originally opened as the Electric Empire Cinema on 13th December 1913.

The La Scala Cinema closed in 1971 and was converted into an independenly operated bingo club, which operated as the Carlton Bingo Club until 2006, when it was closed. One of the reasons given was the new law banning smoking in public places.

To clarify some of the info above, the hall was purpose-built as the Empire Electric Theatre, rather than being a conversion. That name is carved into the facade above the door – a feature hidden until bingo signage was recently removed. Some rudimentary stage facilities reportedly still exist in void areas behind the current stage. It closed as a bingo hall in 2006, with the company operating it blaming the smoking ban which had just been introduced in Scotland that year. Despite being listed as recently as May 2007, less than a year later, the council and their developing partners have purchased the building with the intention to demolish it, and build a new library, museum and elevated walkway on the site, to better link the new Asda supermarket behind the building to the existing high street. The architect of some of the later alterations to the building is said to be Alister G. MacDonald (spelling of his forename varies!), son of former Labour prime minister Ramsey MacDonald, who was best-known for designing the newsreel cinemas in London’s Victoria and Waterloo stations, as well as the Elgin Playhouse and the Broadway in Prestwick.