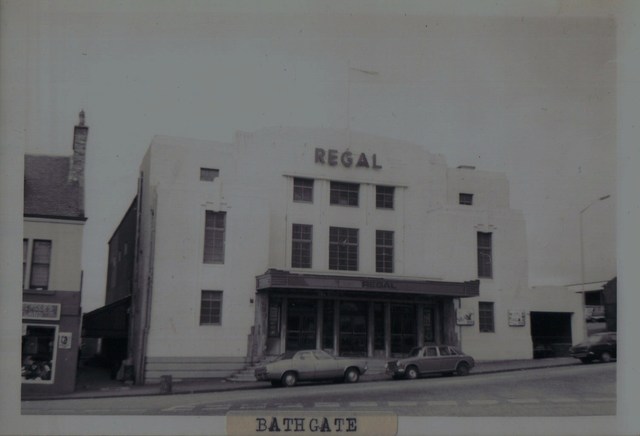 Located in Bathgate, a small town to the west of Edinburgh, the Regal Cinema opened on 17th July 1938 with Janet Gaynor in “A Star is Born”. It was designed in an Art Deco style by Leven based architect Andrew David Haxton, who employed Newcastle-upon-Tyne based interior designer John Alexander, to provide the two relief panels of naked Roman charioteers on the splay walls beside the proscenium. These were considered indecent back in 1938, and almost cost the cinema its operating licence, but they were allowed. There are two other examples of Alexander’s work remaining in Britain, the the Northwick Cinema, Worcester (now in retail use) and the Forum Cinema, Hexham (now a Wetherspoons pub). The Regal Cinema had 1,067 seats, a proscenium 30 feet wide and a 28 feet deep stage, with four dressing rooms.

The Regal Cinema was closed on 3rd June 1972 with Richard Rowntree in “Shaft”. In the 1970’s, the auditorium was sub-divided horizontally and the lower section went to other uses. The former circle became a 267 seat cinema re-opening on 20th February 1977 with “Towering Inferno”. In March 1982 a second screen was added. The building was taken over by West Lothian District Council by 1984. It was closed just after Christmas 1992 and a new operator was sought. It re-opened later in 1993.

However, the Regal Cinema closed on 23rd September 1993 as a full time cinema and a proposal was put forward for demolition. It was saved and today is in use as a community arts centre known as the Regal Community Theatre which opened on 28th April 1995. There is a 120 seat cinema located in the former circle, whilst the main floor is in live performance and community use with 206 removable seats. The theatre space was closed in September 2017 when the operating company went into voluntary liquidation.

Photos, including interior pics (although these predate further internal alterations) at the bottom of this page here:

This link also includes information and photographs of Bathgate’s other surviving cinema, the Pavilion.

The John Alexander roman centurion splay wall panels in the Forum Hexham pre date those in the Regal. The Forum was built in 1937 and the stalls are now a Wetherspoon pub with a cinema in the circle.

It reopened as the Regal Community Theatre in 1995 and operates with a combination of paid staff and volunteers. The entrance foyer has original terrazzo floor and the auditorium has a capacity of 206 with tiered seating and 120 when cabaret space is set up. A film society hires the space and shows films twice a month. Regal Radio, a community station for West Lothian, broadcasts from the theatre.

Theatre now seems to have gone into voluntary liquidation although a separate company did stage the Christmas pantomime Snow White over the festive period.