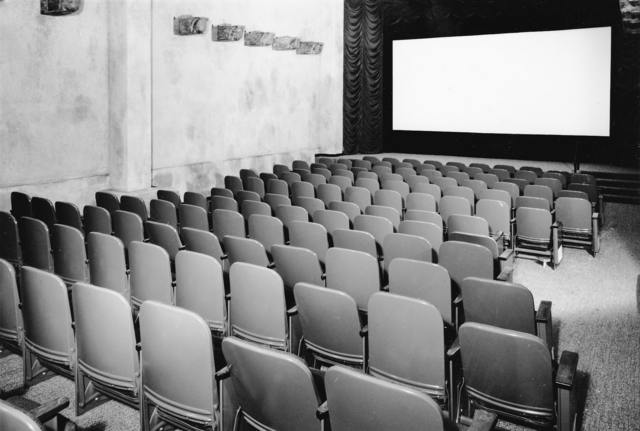 This theatre was located in a building across the street from the Roxy night club. The Granada Theatre was opened August 15, 1967 with Alan Bates in “King of Hearts”. Walter Reade Theatres ran a few houses in the 1970’s in Los Angeles (Granada Theatre, Music Hall Beverley Hills, and Beverly Canon Theatre). This house was a standard 1970’s curtain house.

The Granada Theatre was located at 9000 Sunset Blvd. in West Hollywood.

The Granada Theater is located in an office building on Sunset Boulevard in West Hollywood. I saw the original film of “The Producers” with Zero Mostel and Gene Wilder there during it’s exclusive engagement in the Sixties.

So the theatre building wasn’t razed to make way for the bank building that currently sits on the site?

When did this theater close? I don’t remember knowing it from when I moved to L.A. in 1972, but that doesn’t mean it wasn’t still going for a while.

The Granada Theater at 9000 Sunset Blvd opened in August 1967 with Philippe De Broca’s THE KING OF HEARTS, starring Alan Bates and Genevieve Bujold. The theater was a newly constructed space on the ground floor of the still standing, multi-storied office building. The interior was done by John Weidman Design, with Spanish details that he had purchased from the Hearst Estate at San Simeon. Across the street was a strip club called The Largo, which was converted into The Roxy o/a 1972.

The Granada was part of an expansion by The Walter Reade Organization, a well known New York based theater chain that owned the well established Baranet and Coronet theaters. They also assumed the management and programming responsibilities at the time for two small theaters in Beverly Hills, The Beverly Canon and The Music Hall.

I opened and managed The Granada for one year, after graduating from UCLA, during which time it played first run art house product, including THE PRODUCERS, FACES, SALESMAN, CHAPPAQUA, Sergei Bondarchuk’s WAR AND PEACE and ULYSSES. I left in the summer of 1968 to work at the new American Film Institute Greystone facility. I do not recall how long the site remained as a film theater, but it wasn’t long. -John Ptak

It was a revival house around 1973-74. I used to go to Marx Brothers double features there. The theater was obsessed with the Marxes and ran every conceivable feature combination. They published a monthly schedule.