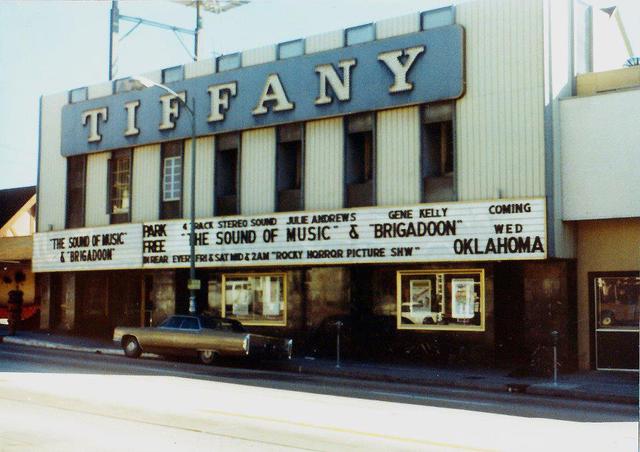 Opened November 3, 1966, the old Tiffany Theater was a much beloved West Hollywood movie house which, like the Nuart Theatre, Fox Venice Theatre, and Vagabond Theatre, ran classic films during the 1970’s and 1980’s. It was also the site of an annual 3D festival.

The Tiffany Theater closed in the early-1990’s as a movie theater, but reopened a few years later as a playhouse, later known as The Actors Studio.

The Tiffany Theater, which is slated for demolition in the near future, ended its long run in March 2002 with Alan Bennett’s "Talking Heads" with solo pieces performed by actors such as Annette Bening, Tyne Daly, and Swoosie Kurtz.

It was finally demolished in August 2013.

Demolition of the Tiffany Theater began on August 8, 2013.

The Tiffany Theater was demolished on August 30, 2013.

The Tiffany Theater sits on the land that was originally featured on the television show 77 Sunset Strip. In real life that property was the home of the Mary Webb Davis modeling agency. In some of the photos in the PHOTO section here you can see the building to the left of the theater that was used as Dino’s Lodge on 77 Sunset Strip. Kookie (Edd Byrnes) parked cars between the two buildings on the TV show.