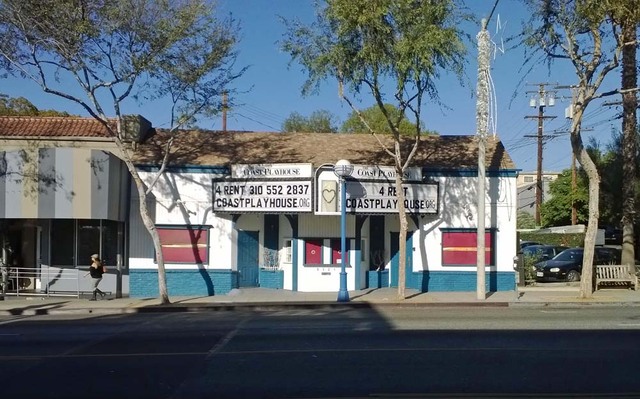 From November 22, 1985 it has operated as a live theatre, known as the Coast Playhouse, it often presents plays with a gay theme, complementing its West Hollywood location.

A lot of small theaters have 99 seats because 100 or more triggers some kind of payment to the actors' union. These 99 seat places are called “equity waiver” theaters.

The Coast Playhouse was also the Players Ring Theater in the 1950’s and early 60’s. My father Ted Thorpe owned it along with the Gallery Theater just a few blocks away. I have been trying to find info from my past and when many childhood memories have faded its hard. I found this site in my searching and thought you might be interested.

As the Players' Ring Theatre, this house goes back to at least 1949. Players' Ring was one of several professional theater companies that flourished in Los Angeles during the postwar period. I recall seeing the theater’s ads in the L.A. Times into the 1960s. James Arness, Marlo Thomas, Roger Corman, Michael Landon, and Jack Nicholson are among the alumni of the Players' Ring.

I’m not positive, but I think the Gallery Theatre was the name of a second stage in the same building, and it was probably that room which became the second screen of the Gary Theatre when it was a twin movie house.

The building is quite old. The L.A. County Assessor’s office says it was built in 1925, with an effectively built date of 1932. I don’t think it was originally built as a theater.

Also, this theater is located inside the limits of the incorporated City of West Hollywood, not Los Angeles.

A Stone-Miller Commercial Property Sales “For Sale” sign was recently posted on the theatre.

The city of West Hollywood has purchased the theatre for $2.5 million; the intent being to ”anchor a potential Center City Arts District in the city”. Per reports, after an extensive remodel, “it will be a venue for dance and possibly small musical/cabaret type performances as well as theatre.”

I acted in the Player’s Ring when it was already “old” and that was in 1957 or ‘58! It was started by Charlie Chaplain, Eugene O'Neil and William Saroyan … and others whom I cannot now remember. Sad that I cannot find this important Hollywood history on the web. I am certain that someone still living knows of this!

While searching for something unrelated, I found a couple of (very tiny) ads in the L.A. Times Calendar section over a couple of weeks in November 1973. What caught my eye was the film titles: a double feature of Ken Russell’s “The Devils” and “The Music Lovers” in the Gary I, and two other main studio releases in the Gary II.