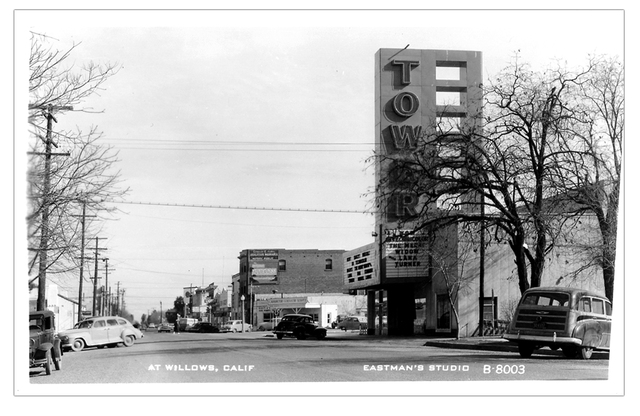 The Tower Theater opened by T&D Jr, Enterprises on May 25, 1949. After closing, the front tower feature on the building was demolished, but the auditorium remains, but badly deteriorating.

I’m semi-local myself, living in the next county east, but I have no chances to get out of town coming up, even for a short trip.

The Tower Theatre was built by T&D Jr. Enterprises. The opening date of the theater was May 25, 1949, according to Boxoffice Magazine of May 29. The house had 946 seats, and the first manager was Mario Menconi. The Tower either supplemented or replaced the local Rialto Theatre, which Menconi had also managed.

Here is a 1982 photo. The city is misidentified.
http://tinyurl.com/q9vtpw

According to this article, a study is being funded to explore the possibility of converting the theater building into senior housing: View link

We were in Willows two weekends ago. This theatre is across the street from the National Historic Landmark Willows Post Office—Main. While taking in the ambiance from the steps of the post office, I noticed the theatre, but had not mapped it yet. It looks horrible, like a really poor candidate even for conversion to another use. But I am no expert! Sorry I didn’t get pics, will try to the next time through.

From the 1950s a photo postcard image of the Tower in Willows. The movie feature was the “Merry Widow” from 1952 starring Lana Turner.

I’ve posted a couple of pictures of the current exterior condition of the old Tower, taken in October 2014, on the Photos page. A local merchant told me (so take this as hearsay) that the city would love to demolish the dilapidated theatre but the owner is a woman in San Francisco who is balking about the expense, saying she can’t afford it. The local merchant told me that she (the local) has been inside and it is in absolutely horrible condition, occupied at time by squatters, severely vandalized and with a ceiling in danger of collapsing.

I live in Willows. Yes, there is very little left of this theater. You can see a tiny bit of the old neon sign on the exterior of the auditorium, but that is all. The building has been white washed and in slowly decaying. I came from Southern California and that area is full of lots of closed businesses too.

The Tower theater has two sister theaters, the Ritz in Hayward and the Sunset in Lodi. They are all identical.

The Tower Theatre might not be utterly doomed after all. This article posted by the Glenn County Transcript on August 27, 2019, tells of a non-profit organization called the Willows Revitalization Group which had acquired title to the theater and plans to renovate it as a mixed-use facility housing a restaurant, culinary school and downsized theater. That I can find no more recent information about the project is not an encouraging sign, but the pandemic has undoubtedly delayed their work, and perhaps the plans will go forward eventually.