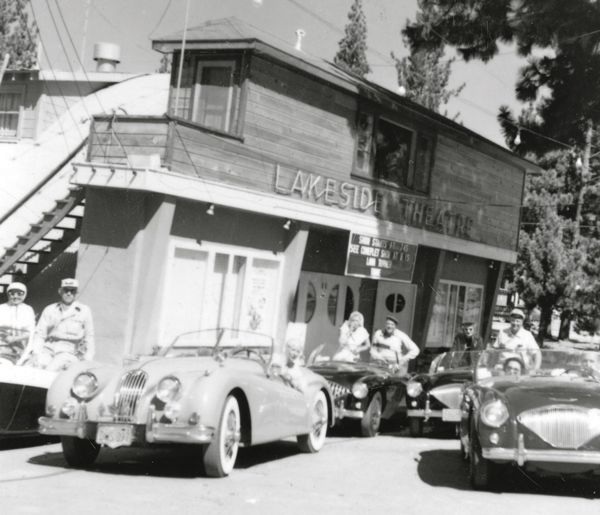 Located in the town of Bijou (later renamed South Lake Tahoe). The 450-seat Lakeside Theatre was a South Shore Lake Tahoe Quonset Hut style theatre, with a wooden rustic style façade. It was owned and operated by local Judge Rudy Buchanan and wife Jeannie since opening in June 1948.

Major movies played there in the summertime months before they would “premiere” in Hollywood … how/why I don’t know (this fact applied also to the Tahoe Drive-In in the early-1950’s. Perhaps the summertime Tahoe tourism was a test market).

The original Lakeside Quonset Hut style building collapsed under heavy snow in 1962; the Buchanan’s then opened a beautiful new Lakeside Theatre in 1963 which included their new home living quarters, upstairs adjacent to the projection booth!

The Buchanan’s passed away and new owners divided the lovely auditorium into an automated four-plex. About 2000, it was demolished and replaced by retail businesses, starting with Office Depot.

Boxoffice of May 15, 1948, said that Rudy Buchanan and Charles Johnston’s Lakeside Theatre in Bijou, California (the original name of this town later absorbed into South Lake Tahoe) would be ready for opening about the middle of June.

“Lakeside Theater was owned by Betty and Will Tomlinson. He,was Vice President of Screen Gems. I worked there in the mid 60’s selling tickets. They wanted me to move to Crescent City to run a theater there for them but I didn’t. They also opened the theatre by Cecils. I didn’t make much but it was a lot then.”