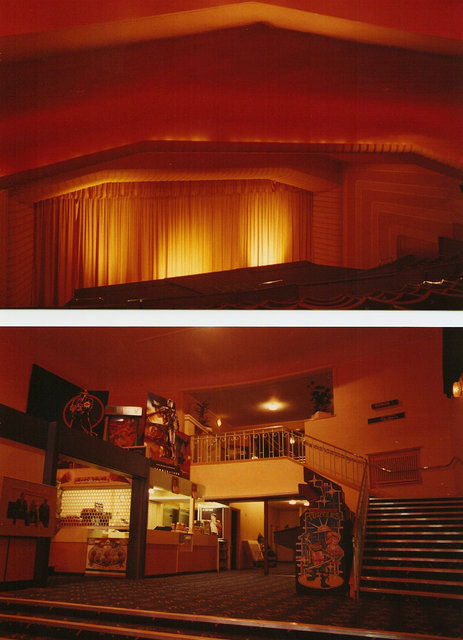 One of the original Oscar Deutsch built Odeon theatres, the Odeon Aylesbury opened on 21st June 1937 with Shirley Temple in “Dimples” & Claire Trevor in “Star for Tonight”.

The exterior has four vertical fins over the entrance, which have three narrow glazed windows between them. Inside the auditorium there were troughs across the ceiling which contained concealed lighting. Seating was provided for 954 in the stalls and 497 in the circle.

In late 1999, with ABC Cinemas about to open a new 6-screen multiplex in the town (now operated by Odeon), the Odeon was closed on 30th October 1999. The building was purchased by the Sainsbury supermarket chain, to enable a new store and car park to be built on the site. Planning permission has been given, but to date (December 2013) the closed-down former Odeon sits awaiting its fate. Demolition began in March 2017.

A block of flats named Oscar Lodge was built on the site.

Photos of the Odeon after a decade of dereliction in February 2009 here:–

Some extraordinary photos are to be found here – including the two projection boxes, containing bits of Cinemeccanica and Kalee lamphouses.

There was so much of this cinema that was intact it should have been listed.

It could still be saved maybe an application for having the building listed would ensure its protection till it can be returned to its original glory? https://historicengland.org.uk/listing/apply-for-listing/

A Listed Building status alas is not worth the paper its written on. They soon find away round it. Only Grade 1 or 2plus a star has a chance..

Sainsburys have sold the site to Churchill Retirement homes and 49 flats are due to be begun this summer. The Odeon is not expected to be around much longer.

1980s Refurb has been pulled out and revealed a most lovely, original staircase complete with ODEON branded Terrazzo floor.

Demolition in progress during March, 2017 but asbestos probably slowing progress. Churchill Retirement flats due to open in Summer, 2018.

The Bucks Herald site has a nostalgia page showing some interior views of the long derelict cinema, including the 5 ODEON letters against a wall. Detailed photos of the actual demolition appear on George Entecott’s facebook page- 269 from every possible angle!

The replacement flats have been named Oscar Lodge and are being let in July, 2019