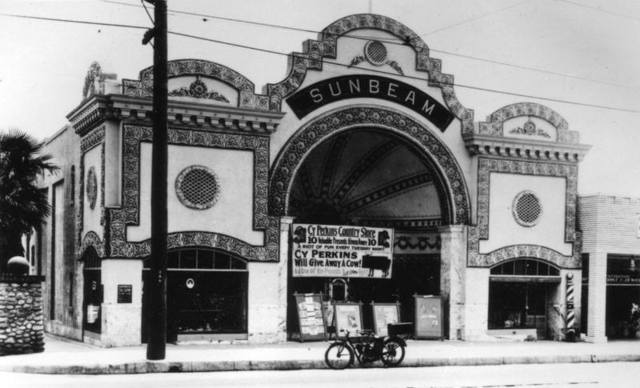 The Sunbeam Theatre was built in 1914. In 1924 it was purchased by the owners of the new Highland Theatre who closed it to avoid competition to their new theatre.

By the way, the address for this theater building is 5722 N. Figueroa Street (originally Pasadena Avenue).

The facade of this theater (which looks like an odd hybrid of Spanish Mission and Art Nouveau) may have been removed in 1933. The July 28th issue of Southwest Builder and Contractor of that year says that architect Clifford Balch was preparing plans for the remodeling of the Sunbeam Theater in Highland Park. I don’t know if this was an aborted attempt to renovate and re-open the theater (given that Balch was a well-known theater architect) or if the remodeling was for the conversion of the theatre into the offices for the newspaper.

An expanded photo of the above, from the LA Library:

I wonder who won the cow?

The 5722 address is for the corner office, the U.S. Office Machine Company, one of the last three typewriter repair comapnies in the Los Angeles area. Jess Flores the owner has been there for 40 years or more. Him and his two sons repair and restore vintage typewriters for the public as well as movie production companies.I believe the other address next door is 5720. Inside the typewriter place there is a stairway that cuts off half-way. The theater has been divided up into three storefronts, I believe. The back part of it was leased at one time by Zach De La Rocha of Rage Against the Machine. Jess Flores,used to be one of the sponosrs of the now defunct Highland Park Christmas parade. It looks like most of the facade has also been covered up by cheap tile, plaster and other false fronting. Most of the buildings on Fig have had this happen to them, along with ugly 1950s plastic facades. A few of the business owners, however, are stripping off the false fronts and exposing the orignal brick or tile fronts.

I wonder if this is the Cy Perkins that bought an airport around Lake Elsinore around 1920, or the granddad of Joe Perkins, who had a grocery store near Garavaza in the 1920s, or if it was a movie tie-in promotion and the cow was to be given away by actor Ernest Shields, who played the character, “Cy Perkins” in the 1915 movie, “Cy Perkins in the City of Delusion” . There was big-time ballplayer back in the teens and twenties named Cy Perkins, but he has no connections to L.A.
I asked Jess but he has no idea.