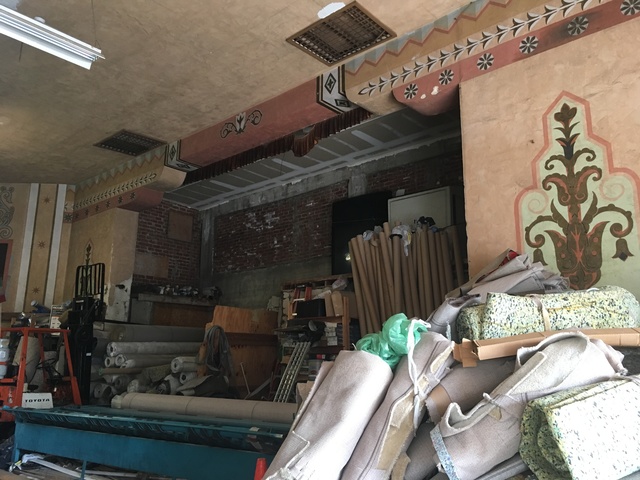 The Franklin Theatre building has not been torn down, although it has been closed for several decades and the building has been severely altered. For many years it was used as DeWitt Transfer and Storage and for several years in the late 1960s and early 1970s as the local headquarters for the Republican Party. At that time, the theater portion was still intact. However, it has since been gutted inside and used for various industrial type uses. The buildings parapet and tower were cut down in the early 1990s. Since 1994, is has been protected by it’s inclusion in the Highland Park Historic Preservation Overlay Zone. This is the theater at which future Los Angeles Police Chief Darryl Gates had his little brush with the law for disturbing the peace as a teenager. As soon as the photo feature is back, I will add a 1964 picture of the Franklin as the DeWitt Storage Building. At that time, only the marquee was gone.

A followup to my earlier comments. The Franklin Theater building is a product of over 80 years of adaptive reuse. It was originally built in 1922 for Fred Stillwell as an automobile sales agency and garage. By 1929, it was operated by the local Chevrolet dealer. In 1934, new owner, E. H. Rose converted the building to a market. The facade was redesigned in cocrete by architect, W. L. Schmolle. The theater conversion ocurred in 1936, when Rose hired architect Lyle N. Barcume, engineer Harold P. King and contractor G. S. Griffith to convert the existing structure into a theater. The marquee, which was engineered by Blaine Noice (who engineer many of the buildings at the old Walt Disney Studios on Hyperion Avenue) and designed and built by QRS Neon Corporation, LTD, was installed in September of that year and the the venue opened as the “Hughes Theatre”. The name was later changed to the “Franklin Theatre”, under which it operated until 1952, when it closed and was converted to DeWitt Storage. Currently the building is used for a carpet cleaning business.

Film Daily Yearbook’s from 1941 have it listed as the Franklin Theatre. Does anyone have earlier editions so we can put a year on when the name change occured?

I wonder if the name change had anything to do with its close proximty to Frankiln High School? There seems to be precedent for this…..there was a Belmont Theater about a mile and a half from Belmont High.

From at least October, 1938, according to various issues of Boxoffice Magazine, the Franklin Theatre was operated by Kurt Laemmle, co-founder of Laemmle Theatres. Max and Kurt Laemmle are mentioned as operators of the Franklin, Park, and Dale Theatres in Highland Park as late as 1951.

Hughes-Franklin was the name of a theater chain formed around 1930 by Howard Hughes and Harold B. Franklin. It was an extensive chain and they had a number of theaters in the Los Angeles area, and based on what little I’ve been able to find out about it some of their houses appear to have been operated in association with local partners. Considering the two names connected with it, I wonder if this could have been one of them? I don’t think the chain lasted very long, though, so it might not have been around by the time the Franklin opened in 1936.

The theater was once a nice one. Just visited it on 10/17/2017. The floor has been leveled and miniature walls have been erected on the inside, but the stage, and murals on the back wall remain, as does some of the architecture. And in the now walled up lobby area, the painted concession advertisements remain, stating “Ice Cream” and “Refreshments. The site is now used as a fabric manufacturer. I believe it was taken over by this entity around 1984? I will post the two pics I took in the photos section.