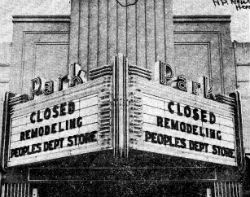 The Park Theatre was one of a few theatres that once lined North Figueroa Street in Highland Park area of Los Angeles.

The Park was gone by the time I became familiar with Highland Park, but Ivers' was still there in the mid-1980s.

If you go to the California Index at the L.A. Public Library’s web site, and search for theatre, Highland, and Park (one word in each of the three search boxes), you will get among the results a link to a PDF file which contains a scanned version of a Highland Park News-Herald article about the Park, published May 19th, 1963 within a week after the theatre’s closure. There is a picture of the theatre’s marquee, lettered to announce the remodeling of the building to become part of People’s Department Store.

The article gives the opening date as May 29th, 1936. The first program was a double feature of “These Three” and “The Return of Jimmy Valentine.” One of the stars of “We Three” was Joel McCrae, who had as a child lived in Highland Park, across Figuroa Street from Sycamore Grove Park.

Diana Ellis: The article also mentions that, in 1936, the Boy’s Market was located at at Avenue 55 and Monte Vista Street.

The Safeway was on ave 55 and Figueroa st in what is now Pep Boys.
Bob Bailey

LA Times advertises the Park Theater at 710 S. Broadway in 1981. Can someone give me the AKA for this? Thanks.

I think this was a typo – there was a Park at 710 S. Alvarado at that time. Please disregard.

Hey Lost Memory… I’m hoping you can help me out with another theater from the LA / suburbs area. I thought it was called the Park Theater, but it might have been another “P”… In the mid-‘60s, this one was located next door to a Sav-On or Thrifty Drug Store. I remember my brother and I used to stop in there before the movies to buy six packages of candy for just $.25… such a deal! Sound familiar to you? Thanks much! – Kim

Update… My mom was able to pinpoint the Park Theater I was looking for… It was at Crenshaw and Compton Blvd. (now Marine Ave.) The Savon was at 149th.

Unfortunately, it doesn’t look like anyone has created a listing for it here, and my memory wouldn’t be much help for that.

Sure sounds like it, Lost Memory… Thanks!! Hard to believe it’s one that’s still standing after all these years. Very cool! I know we went to the Park a few times, but the only movie I definitely remember seeing there is “Farenheit 451.”

Here is the current occupant of 5825 N. Figueroa:
http://tinyurl.com/36zegm

The May 29, 1937, issue of Boxoffice mentioned that Dave Cantor had built the Park Theatre in Highland Park the previous year. In 1937, Cantor was buying the Canoga Theatre from its original owner, Nate Scheinberg.