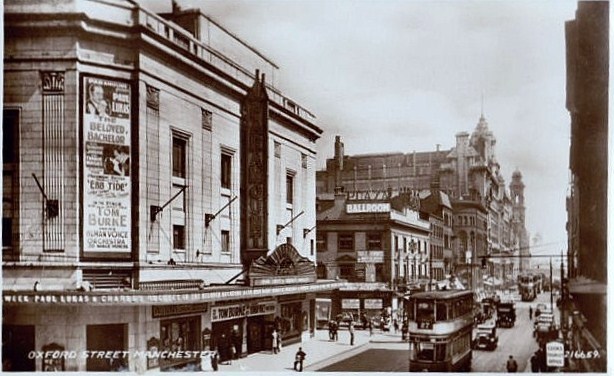 Originally containing 2,920 seats in orchestra, mezzanine and balcony levels, the Paramount Theatre was the largest of Manchester’s picture palaces to survive as a cinema. It opened on 6th October 1930 with Maurice Chevalier in “The Love Parade”, plus a variety show on stage, and it was equipped with a Wurlitzer 4Manual/20Ranks theatre organ. The Paramount Theatre also had a cafe for the convenience of its patrons.

In November 1939 the Paramount circuit was obtained by Oscar Deutsch’s chain of Odeon Theatres Ltd. and it was re-named Odeon in April 1940. It was twinned in 1973, triplexed in 1979 with a further four screens created in 1992.

The cinema was closed in September 2004 due to competition from the AMC Great Northern 16, which had opened nearby in December 2001. In Autumn of 2010, plans were approved by Manchester City Council to demolish the former Paramount/Odeon and redevelop the site for an office building. Preparation for demolition work began in late-June 2013, but demolition work wasn’t commenced until August 2016, and then only a little was done mainly to the interior. Total demolition began in April 2017 and was hoped be completed in June 2017. In mid-June demolition work was halted after the demolition company encountered a few problems.

Still a little sad this cinema shut down, neither the amc or the filmworks live up to the atmosphere this old place had, I saw so many films there over the years, particular highlights were preview screenings of Lord Of The Rings: The Two Towers and The Return Of The King, both full houses and a great atmosphere.

I never had the chance to go into the Oxford Road Odeon, unfortunately, however, i used to walk past it nearly every day whilst i was at Salford Uni. I used to look up at it and think how sad it was that it was boarded up. I ended up doing a little research and reading up about the Gaumont, and the Oxford Picture House (now mcDonald’s) and the countless cinemas along that road, and became absolutely fascinated. It’s funny because whilst people do kick up a fuss at other cinemas closing, this one always seems to keep people talking, whether it’s because of the demolition rumours i don’t know.

I even wrote an article in the student paper, I was that incensed and focused on getting the place re-opened – in the article i interviewed Aidan O'Rourke (from 3D fan’s link!) I’m guessing the Covenant and the details about the interior ‘trashing’ came as a pretty huge blow to him, he was a big campaigner for saving the building and preventing it’s possible faceless replacement.

Anyone interested in this cinema should read about the history of entertainment and cinema along the Oxford Road/Peter Street Axis. It goes back well over 100 years, and it’s really sad, with the exception of the Cornerhouse the end of the Odeon brings the end of that fantastic piece of history. It was Manchester’s most prestigious and luxiourious cinema, it survived world war II’s blitz, it was one of the very few Odeon cinemas which didn’t adopt their unique and now classic architecture, it showed the first full length technicolour movie. It is virtually the last of the manchester picture houses, it outlived pretty much every other in the city, the Gaumont, the Picadilly Picture House, The Deansgate Picture House, The Grosvenor, The New Oxford, The Regal… which is a great feat in itself.

I’m so passionate about this one, and I never even got to step foot in it! It will be such a sad day when the knock it down.

Vintage photographs of the Paramount/Odeon, and its Wurlitzer organ console:
http://www.ukwurlitzer.co.cc/2120.html

As of this day demolition crew is moving in now, shame that this has happened but with no active group to save this once finest Paramount Theatre, it was only a matter of time. Great loss and manchester’s last remaining original cinema building in the city will be gone in a couple of months or so.

Ammendment: In June I wrote that demolition had started. As it turned out I noticed two weeks later that they hadn’t started demolition at all, they took down the canopy outside and screened of the front of the building with advertising hoarded for the new building that will replace it. Apparently the, the new owners will not start demolition untill they have sold all the spaced for the proposed office block. That’s the story as far as I understand. Will post a photo of how it looks now.

Given the scary ceiling collapse at the Apollo in London, does anyone remember a similar ceiling collapse at the Manchester Odeon during a screening of Return of the Pink Panther? Must have been around 1975 I was 12 years old and remember the terrible cracking sound, as described now in the Apollo, thinking there was something wrong with the soundtrack, and the the plaster falling down above and behind me. Fortunately nobody was injured, but there was a lot of dust and panic. My older brother made the most of it – he got our money back and went for a pizza!

I have just signed into this site ..I am trying to gather information re my late great – grandfather. William Millward. I’m going back to 1921 .he was the owner of the Seal Film company & took Jessica’s first prayer into a successful silent movie ..Enid Sharpies played piano for the silents..I am told he owned cinemas in the UK.Is there anyone that maybe able to furnish me with more details ..Thank you kindly .

The derelict explorer just posted these pics today on their FB page …obv pics taken after cloesure but before demolition! though youd find em interesting https://www.facebook.com/photo?fbid=183989246845451&set=pcb.184005483510494