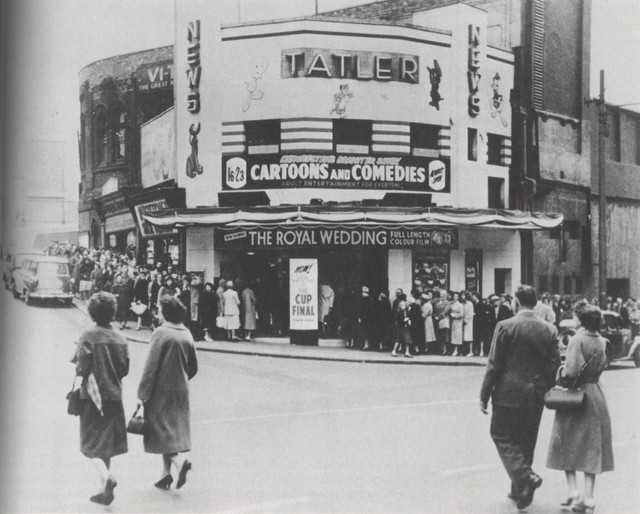 The Cornerhouse began life as a replacement cinema for the Whitworth Street Electric Theatre (later Majestic) which opened in 1911 and was demolished in 1934.

The Tatler News Theatre, designed by Peter Cummings, opened on 3rd May 1935 with a seating capacity of 300. Sited next to Oxford Road Railway Station the Tatler News Theatre was in an ideal site for its ‘drop-in’ programme of cartoons and news-reels, and this lasted until September 1959.

These kept the projectors rolling until closure came again in August 1981. By February 1985 it had become the Glamour Cinema Club who had vacated their George Street premises, screening uncensored adult films (the original Glamour Cinema has its own page on Cinema Treasures).

Across the narrow pathway to the station was Shaw’s furniture showroom which, in 1985, was bought to be converted into an arts complex of 2 cinemas seating 170 and 60, galleries, café and bookshop. It was quickly realised that the former news theatre would make the best and largest screen of the complex and was thus acquired refurbished and reopened on 11th October 1985.

It then began the most popular and successful period of its life, the three Cornerhouse Cinemas as they are collectively known had an enterprising programming policy and loyal audience.

A full refurbishment was carried out in 1997, comfort and excellent technical facilities were paramount.

The Cornerhouse Cinemas was closed on 4th April 2015. One of the final films screened was “Blue Velvet”. The building will be used by Manchester University as a teaching space. In May 2015, the Cornerhouse Cinemas will be moved across to a purpose built arts centre known as Home, which contains five screens, a 450-seat theatre and a 150-seat flexible theatre space.

Due to the relaxation of the Licensing Laws in England and Wales which are due to come into force in November 2005, the Cornerhouse Cinemas have become the first cinema in England to be granted a 24 hours Drinking Licence to serve alcoholic drinks 24/7.

Of course making it legal doesn’t mean it will happen and the managment have stated that drinks will be normally only be served during regular cinema operating hours. It’s nice to think you can get a drink at 3am after a late night movie has finished and chat to friends in the cinema bar. Most civilised….and about time too.

A photograph of the No. 1 screen in the Cornerhouse Cinema, Manchester:
View link

here is an ariel shot of the two Cornerhouse buildings taken around 1994 from my office, it was before the glass wall makeover of the main cinema.
in the distance you can see the BBC building and next to it the bulky pitched roof of the Regal Twin (now Dancehouse theatre)
View link

Another photo taken in 1988 before the external cladded was added:–