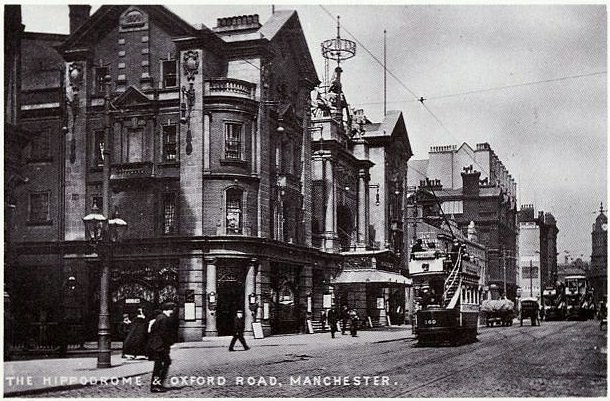 Located in Manchester city centre. The Hippodrome Theatre was built on part of the site of Hengler’s Grand Cirque, which had opened in 1900. The Hippodrome Theatre was built for Sir Oswald Stoll as a multi-purpose theatre which enabled circus performances, variety theatre use (via a movable 54 feet wide proscenium), and water spectaculars (in a tank containing 70,000 gallons). It was designed by noted theatre architect Frank Matcham in a lavish Arabesque style.

The Hippodrome Theatre opened on 26th December 1904 with a circus presentation, which included acrobats, performing dogs, elephants and high wire acts and the main attraction was “Tally-Ho! A Hunting Sensation in Four Acts”. Also on the opening programme were animated pictures projected from the Bioscope machine. It operated with the format of circus and water spectaculars for the first six years.

In 1911, it was converted into a full time variety theatre, and attracted famous stars such as Sarah Bernhardt, Ellen Terry, Lilly Langtree, Pavlova, Phyllis Dare, Gracie Fields, George Robey and George Formby. Films were included as part of the variety programme.

In 1933, it presented a season of Shakespeare plays which included “Julius Caesar” and “The Merchant of Venice”. In the autumn of 1934, the Hippodrome Theatre was equipped with a Western Electric sound system and began screening films, the programme included just one variety act. The theatre was sold to the Granada Theatres cinema chain on 15th November 1934, and was closed on 2nd March 1935. One of the last films to be screened was Ronald Colman in “Bulldog Drummond Strikes Back”. The name Manchester Hippodrome was transferred to the Ardwick Empire Theatre.

The Hippodrome Theatre was demolished, but some sections were retained in the magnificent new Granada Theatre which was built on the site. Just days prior to its opening, Granada Theatres sold the building to the Gaumont British Theatres chain, and it opened as the Gaumont on 21st October 1935.

The Gaumont too was demolished in 1990, and the site lay empty for many years until a multi-storey car park was built on the plot in the late-1990’s

This webpage has some related pictures: View link

There is additional information about and memorabilia related to this theatre here.