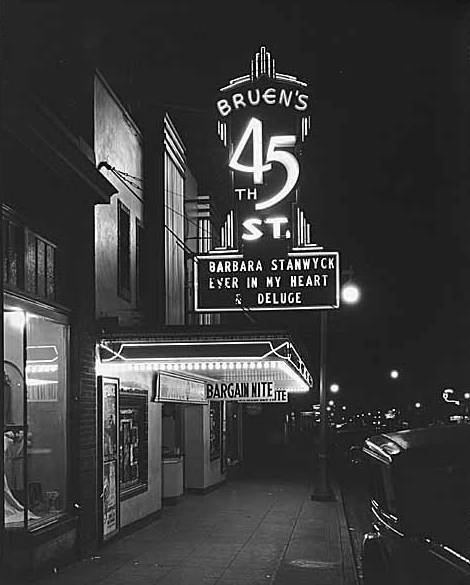 Originally opened in 1919, the Guild 45th Theatre was named the Paramount Theatre for about seven years before the downtown Paramount Theatre opened. In 1933 it was renamed 45th Street Theatre. Around 1955 it was renamed Guild 45th Theatre. It became the Pink Theatre which was given an Art Deco style remodel. The Pink Theatre which had 490-seats, stadium seated, had its marquee removed for safety reasons in January 2022.

A second screen was built in 1984, named the Blue Theatre, two doors down from the main theatre. It had about 200-seats, stadium seated, in 2013. Landmark Theatres closed both theatres on June 5, 2017 ‘for refurbishment’. The marquee has been removed after being hit by a truck.

I worked at this theater for almost 4 years, in addition to most of the other Landmark Theaters in Seattle. The employees (myself included, I suppose) tended to be quirky and one of the ways that manifested was on the marquee. Near the end of a theatrical run we really had fun thinking up funny stuff to put on the marquee. At least in the late 1990s the manager OK’d and/or helped think up the jokes.

What goes up depends entirely on the particular manager. A few of the managers around town had no sense of humor, so only titles and times went on their marquees. I remember when The Neptune, down the street, played Das Boot: one suggestion was to put WHAT’S LONG AND HARD AND FULL OF SEAMEN? on one side of the marquee, and DAS BOOT on the other… Needless to say that was a little too vulgar ; )

Have attended many films at the Guild but must say this place has seen better days. Landmark has not spent any money on this house in years. To bad as it once was a nice neighborhood house. Now uneven floors, dark and dirty, Hopefully someone someday will fix and keep the Guild 45th around for a long time to come. Great marquee.

As of June 5th the Guild 45th is closing. According to website stay tuned for remodel plans.

It would be great if Amazon follows Netflix’s model of acquiring these classic theatres and using them for screenings of their productions.

There is a Guild & Guild II.. And an old home type structure is between them.. Interesting!!

Randy Finley, owner of the original Guild tried but was unable to purchase the adjacent property in order to expand. It was a pizza restaurant at the time. He instead purchased and demolished the building two doors down the street to build Guild II. Guild II opened in 1984.

I haven’t seen or heard of anything action being take to reopen either property. Both buildings remain boarded up and covered in graffiti.

A 3 minute long documentary on The Guild from 2015 can be found on Youtube: https://www.youtube.com/watch?v=y4A20aP_4D4 It has many shots of both the interior and the exterior along with an interview with the long time manager.

Seems both Guild 45th theatres are still standing, with no demolition permits filed. Only the marquee of the original theatre, which had been damaged by a truck, has been removed: https://twitter.com/marcstilespsbj/status/1482933849222905857?s=21