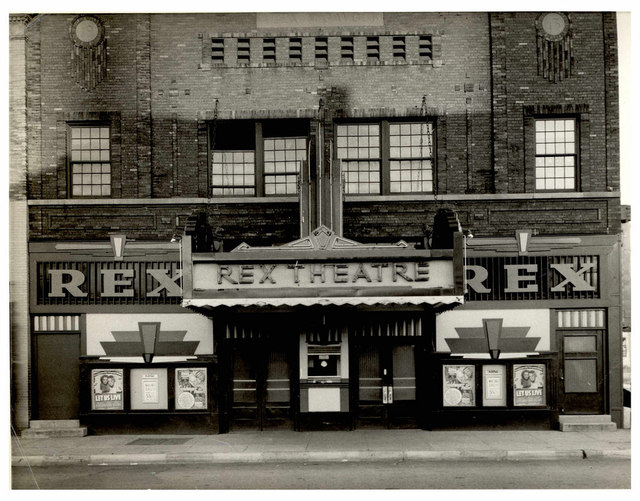 Located on 4th Street, between what today is a Mexican Restuarant and the Iron Works Lounge. The Rex Theatre was operating prior to 1929.

In the 1970’s it was re-named Ellis Theatre. Since closing it has been demolished and the site is a parking lot.

There is a Mexican restaurant, address 618 Fourth Street, immediately to the right of this building. After this building there are several parking lots. Although the building looks old given the ads on the side, it could be anywhere from 620-628 Fourth, meaning the theater adjacent to it would be demolished. This is all speculation, however.
http://tinyurl.com/6ge3tu

Addendum: There is an inscription of “McGavick Building 1900” on the top of the Mexican restaurant. Since the two buildings are essentially one piece, that would date this building back to the beginning of the twentieth century.

Trying to confirm a personal appearance at the Rex in Beloit in the Summer of 1948 by the Three Stooges, Moe, Larry and Shemp.
Frank Reighter

I’ve been unable to find any confirmation that the Three Stooges included Beloit on their 1948 tour, but they did spend a lot of time touring so it’s quite likely they made a stop there that year.

The Rex did have a stage. The October 8, 1938, issue of Boxoffice reported that it was among a number of Wisconsin theaters which had recently been presenting live performances along with movies. Most of the acts named were big bands, but the item didn’t name any acts that had appeared at the Rex in 1938, but the April 6, 1940, issue said that Dot Hackley’s Hollywood Cowgirls had recently made an appearance there.

The Rex suffered an estimated $10,000 damage in a 1951 fire which was prevented from entering the auditorium but nearly destroyed the women’s rest room and the foyer, according to Boxoffice of January 13.

I’ve found the Rex mentioned in the trade publications as early as 1929. The most recent mention I’ve found is from January, 1955, when CinemaScope was installed.

In an appearance on the Tonight Show with Johnny Carson in the 1970’s, William Demarest of “My Three Sons” fame reminisced about a visit to Beloit with a vaudeville act in the 1920’s.
I can’t remember which theatre he indicated by name but I placed it as being on Broad Street so it must have been the Majestic.
BTW the Ellis Theatre was so-named well before the seventies because I was watching movies there as a young kid in the early sixties.

The Rex-Ellis Theater in the City Directories, there were a lot of years missing at the public library. The number of the building changed a lot.

The picture I added of the Rex is from 1915. It’s the farthest 2 story building.