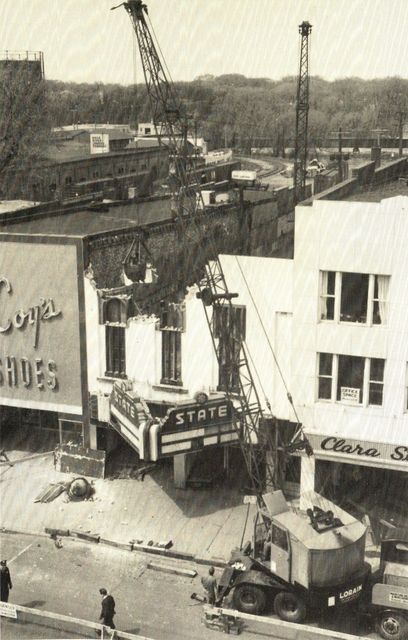 Trying to confirm a personal appearance at the State in Beloit in the Summer of 1948 by the Three Stooges, Moe, Larry and Shemp.
Frank Reighter

The February 29, 1960, issue of Boxoffice reported that the State Theatre in Beloit was to be demolished to make way for a drive-up banking facility for the Second National Bank.

The State is mentioned in Boxoffice as early as 1938, but had probably been around for some time. It was one of three theaters in Beloit long operated by Wisconsin Theatre Enterprises and Standard Theatres.

The photo I added of the State had the building way closer to Grand Ave. I know because my friends barber shop is in the same photo in the old Walt’s jewelry store.

I was born and raised in Beloit, Walt’s was a restraunt first and then A jewelry store, The State Theater was torn down to make way for a Drive thru Bank