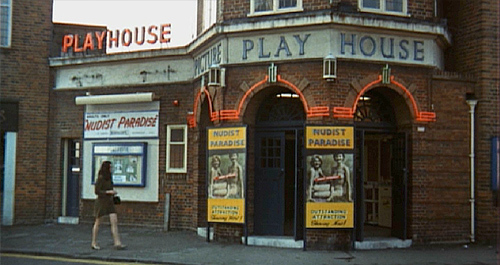 Located in Gerrards Cross in Buckinghamshire. The Picture Playhouse opened on 12th October 1925 with Richard Denny in "I’ll Show You the Town". Its corner entrance has an octagonal tower, with three Georgian style entrance arches (now replaced by conventional glass entrance doors). Inside the auditorium, all 570 seats were on a single floor, including a series of boxes along the rear wall, each containing 4-seats. There were Grecian pillars spaced along the side walls and the proscenium was 25 feet wide with dressing rooms and a stage provided. The cinema was equipped with a cafe and a dancehall and a car park for 30 cars.

In 1947 it was taken over by Southan Morris and in June 1950, alterations were made to the auditorium, with the removal of the boxes and a re-raking of the stalls floor. It was taken over by the Essoldo chain, but wasn’t renamed Essoldo until November 1969. It had undergone a facelift, with the auditorium painted black and 392 new seats installed. Red carpet and red drapes on the walls completed the scheme and it re-opened as the Essoldo on 29th November 1969 with a charity performance of "Battle of Britain".

The Classic chain took over Essoldo and it was re-named Classic Cinema from 26th March 1972. In 1979, the auditorium was twinned with a new 213 seat screen built above the rear stalls and 386 seats retained in the stalls seating area. The new screen has a screen located on what was originally the rear auditorium wall and a new projection suit was built in the roof of the auditorium to serve both screens.

Later taken over by the Cannon Group, then ABC in a management buyout. Since 2000 it has been operated by Odeon Theatres and seating is now provided for 296 and 182. In April 2015 it was announced that the Everyman Cinemas chain were to take over four Odeon’s: Gerrards Cross, Muswell Hill, Barnet and Esher. The Odeon Gerrards Cross was closed for renovations on August 10, 2015 and re-opened 23rd October 2015.

I am presently a manager at the Odeon and would be interested in any pictures of the building from its heyday, especially interior shots. We have some pictures from it’s claim to fame in Carry On Camping. First time I’ve seen a picture of it as an Essoldo!

The ODEON closed on Thursday 6th August. It has been sold to the Everyman chain, who take over 10th August 2015. The building will be closed until at least early October for refurbishment, with an estimated turnaround time of 2-3 months.

I have done some research and can confirm that this building is the oldest functioning cinema in Buckinghamshire. The second closest is the Astra in Halton (which opened a mere 4 months later in January 1926). The previous cinemas in the area have all been closed down.

I used Martin Tapsell’s Memories of Buckinghamshire’s Picture Palaces and this website for researching.

The Everyman Gerrards Cross is open again and showing movies. It reopened on 23rd October 2015.

The movie seen being watched in The Picture Playhouse, in the beginging of the movie “Carry on Camping” was “Nudist Paradise”. The cinema was also seen in the movie “Prudence and the pill”.