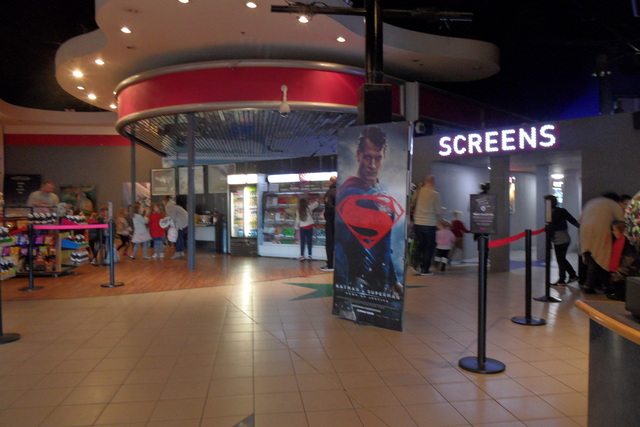 The 8-screen Odeon opened on 25th August 1995 with 1,840 seats. It was designed by the firm S & P Architects. It was part of the Jarman Park Leisure World complex which included a bowling alley, a nightclub, ice rink, water splash park and restaurants. Seating capacities in the screens ranged from 433 down to 130. The Odeon was taken over by Empire Cinemas in October 2005.

Unfortunately, the complex became very rundown (it became known, rather disparagingly, by locals as ‘Wally World’). Plans to redevelop Jarman Park were put forward in December 2011. These eventually came to fruition in 2014-2015 when, in an £8.5m deal, Capitol and Regional sold the site to Tesco Pensions Trust. Three principle locations now comprise the newly name Jarman Square. A Tesco Extra superstore, an XC extreme sports centre and a separate complex encompassing a number of restaurants, Planet Ice and a new Empire multiplex.

Empire Cinemas acquired 35,000sqft of space to the rear of the existing cinema, and 9 new screens opened on the 9th October 2015. At that point the existing former Odeon screens were closed and demolished. These were replaced on the 26th October with 5 new screens. A few days later an IMAX auditorium opened, followed by and IMPACT BLUE screen (Which became a Superscreen and an IMACT LUX screen.

In July 2016 it was one of five Empire Cinemas purchased by the Cineworld chain. The other four were the Empire Leicester Square, London, Basildon, Poole and Bromley.

Appreciate the detailed and helpful reply.

As I said, Cineworld Hemel Hempstead is mostly on one level with the exception of a slightly raised area where you go up a handful of steps to three other screens. Or, at least that’s how I remembered seeing it when I was trying to find a restroom after watching a movie in one of the smaller auditoria a couple of years ago.

Will have a full walk around when I’m next there to refresh my memory.

If you take a look at the photo in the overview at the top of this page, although it’s not totally clear, Screen 7 on the right of the image is slightly raised and above the level of Screen 13 to the left of the image. The glass panelling is prevent customers from falling off the edge of this raised walkway.

Screen 3 was originally to be an identical version of Screen 2 (IMPACT: Blue) which has 185 seats. Cineworld obviously rebranded Screen 2 to Superscreen. Screen 3 however is not a Superscreen.

Looking at the booking pages on Cineworld’s site (if I haven’t miscounted!):

It would seem not only did the idea to have two IMPACT auditoria whilst under Empire Cinemas ownership get dropped at some stage but also it would appear I was given misinformation by one of the manageress’ as she told me both auditoria would be identical and the second IMPACT would open approximately six months after the first one did. Looking at some of the other Empire Cinema sites that have two IMPACT auditoria, some of them have one IMPACT (sometimes referred to as IMPACT Blue) and one IMPACT Luxe which tends to be larger and have more seats.

So, it doesn’t surprise me that Screen 3 has significantly more seats than Screen 2. The screen size itself is not particularly large. Think I watched The Snowman in that screen October 2017? Also, there are no leather recliner seats at this cinema. Which, unless I am mistaken, is another attraction of IMPACT Luxe auditoria?

I had noted (although unsure from which source) Screen 3 as being 14 rows x 31 seats. Usually the only way to find out this information is to go online to the bookings page and work your way through all of the movies and all of the separate performances at which point you can find out which auditoria each one is being shown in plus you can count the number of rows and seats from the seating selection. Can’t imagine that got changed after this screen was opened to the public unless the seats got changed adding more legroom which would be the only explanation for a number of rows to be removed.

Total seats by my quick count is 2,173 (not 24,766 which obviously is a typo otherwise would surely make this the highest number of seats of any cinema multiplex in the world!)

From my notes here’s just a handful of cinemas (there’s plenty more I’ve not listed) that have two or more identical auditoria.

Six different auditoria at Cineworld, Hemel Hempstead have the same number of seats as at least one or more other screens.

Empire, High Wycombe has three screens that each have identical auditoria layouts plus the same number of seats. Screens 3 & 4 are the largest. Screens 2 & 4 are medium sized. Screens 1 & 6 are small sized. Screens 7 & 8 which were added many years after the original six were built are tiny with very few rows.

Cineworld, High Wycombe – screens 1 & 7 are identical in number of rows and seats followed by screens 3 & 6.

Looking at the photo uploaded by SteveAWOL described as “Superscreen 2,” given that this has 9 rows of seats, with >20 seats/row visible—so I assume this is in fact Screen 3—with the photo taken prior to the front row seating being installed either side of the disabled bays?

It is clear from this photo that an Atmos sound system was installed as overheads are clearly visible; the seating is the same Seating Concepts “Empire” model as used in other Empire Cinemas' sites, and other decorative features also follow Empire Cinemas' current house style. I assume the main change resulting from Cineworld’s acquisition was the “star logo” signs and lack of horizontal strips on the sidewalls, and perhaps alterations to the ceiling “recesses” for the overheads, including the addition of red coloured concealed lighting; these would be an easy enough change if the auditorium was at a late stage of development at the time of acquisition.

So, it looks like the second IMPACT auditorium does in fact “exist,” just not branded/priced as a PLF screen. ;–) (Albeit no idea if there’s a dual projection system installed?)

Also, there are no leather recliner seats at this cinema. Which, unless I am mistaken, is another attraction of IMPACT Luxe auditoria?

Both IMPACT auditoria at Empire Ipswich feature reclining seats and double sofas. The LUXE is actually bigger in terms of seat count and screen size than the BLUE; ditto Sutton (albeit they are closer in size.)

There are no other Empire Cinemas venues which feature two IMPACT screens.

Keep in mind that “supersized” seats are a relatively recent development in the UK, and Empire Ipswich opened last year and Empire Sutton re-opened post-refurbishment this year; I suspect IMPACT “LUXE” is simply branding in line with other operators.

(Incidentally, I think high quality leatherette is used rather than leather, which might not perform well given the wear and tear it would be subjected to.)

Cineworld really ought to add auditorium information to their website. Fortunately, it only took a couple of minutes of clicking around to find a performance programmed for Screen 3—which, compared to the amount of time research takes for some of my posts, is neither here nor there. ;–)

Can’t imagine that got changed after this screen was opened to the public unless the seats got changed adding more legroom which would be the only explanation for a number of rows to be removed.

Doesn’t look like it based on the above-linked photo?

(not 24,766 which obviously is a typo otherwise would surely make this the highest number of seats of any cinema multiplex in the world!)

Oops—almost by an order of magnitude!

Kinepolis Brussels is listed as having 7500 seats on Cinema Treasures, although I wouldn’t be surprised if the seat count has been lowered subsequent to that figure being posted. Off the top of my head, that’s the largest seat count I’ve seen of any multiplex.

It would appear that Empire Cinemas like to round numbers up with regards to seating capacities that each auditoria contain. In some cases such as the IMAX screen by quite some margin (numbers quoted online were 278 or 281 when in fact it only has 210 + 1 Disabled seat!).

So I went through the laborious task of clicking through every performance of all movies being shown until I had seating layouts of all 17 screens and counted them manually.

These are the correct seating capacities per screen.

Perhaps an Admin could edit the Overview one last time with regards to seating capacities?

LARGE_screen_format: Many thanks for counting all the seats. :–)

Regarding the IMAX seat count mystery, having a look at the seating diagram on the booking page for a 3D performance of “Ant-Man and the Wasp” in the IMAX, it is noticeable that rows A and B are missing.

In the seating diagram for a 2D performance of the same in the IMAX, rows A and B reappear, as do 24 missing side seats in rows C-F.

For 2D IMAX performances, my count of the seats comes to 275 + 4 disabled.

Regarding cinemas with identical screens, Cineworld West India Quay has two floors of five screens stacked on top of one another which all match the one above/below, except for screens 1 and 6 (screen six was constructed as a Virgin Cinemas deluxe screen with huge legroom and an additional entrance into the now disused upper bar, but fitted out by UGC with the the same seats and decor as the other screens).

Noticed a few changes whilst on a recent visit.

The Empire Cinemas logo embroidered into the headrests of the IMAX seats have now been changed to all black headrests. These are the same seats as the ones in the IMAX auditorium at Cineworld, LSQ.

The wall and ceiling signs for auditorium numbers, previously were pink as seen in the Overview photo at the top of this page whilst under Empire Cinemas ownership but have since obviously been changed to Red as per Cineworld’s interior colour scheme.

The ‘Upper Level’ to auditoria 7-9 is via two tiny steps (approx. 6 inches in total height). Which seems bizarre that everything couldn’t be kept all on one level. This would have meant the glass barrier wall would not have been necessary down one of the hallways.

If an admin could please update the seat count for IMAX please, its 275 for 2D and 210 for 3D presentations. Also, the reference to IMPACT Luxe could be removed as it never materialised in the end.

There’s no page as yet for the soon to open Cineworld, Watford so I’ll just post it here. Open to the public on 14th December 2018 and will not only have IMAX with Laser (only the third UK cinema to have it) but also ScreenX (only the sixth cinema in the UK to have it).