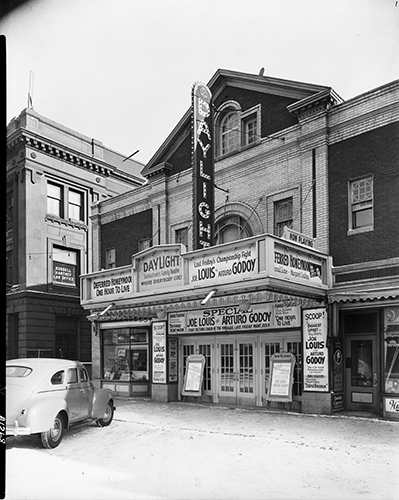 I used to work in the Daylight Theatre in the early-1960’s. I did secretarial work during the day and worked in the box-office in evenings. It was across the street from the very elegant, palatial Capitol Theatre on 2nd Avenue in Saskatoon. I knew nothing about styles of design back then, so have no idea what style it was.

The Daylight Theatre operated from 1917, until Famous Players closed it in 1965. It was remodeled and reopened on September 1, 1966 as the Paramount Theatre, screening “My Fair Lady”.

I haven’t lived in Saskatoon for years. Other old theatres in Saskatoon that are listed on this site are the Tivoli/Odeon Theatre, also on 2nd Avenue and the Victory Theatre on E. 20th Street. I used to frequent all these theatres, along with the Roxy Theatre and Capitol Theatre as a child, and I am now in my sixties, so the theatres were pretty old.

The Paramount Theatre was closed in the early-1980’s. As of July 2009, a business called Paramount Optical is among the cluster of shops which occupy its former address.

The address of the Daylight Theatre, later became the Paramount.

According to this online photo exhibit from the Saskatoon Public Library, this house was the second theater in Saskatoon to be called the Daylight. Photo #6 shows the original Daylight Theatre which opened at 321 22nd Street East in 1912.

The second Daylight Theatre opened at 136 Second Street South on January 1, 1917. It is featured in photos #9, #10, and #20 of the library’s exhibit. In 1966, the Daylight was drastically remodeled, losing its Palladian facade, and was renamed the Paramount Theatre in August that year. The exhibit has no photos of the house as the Paramount, but there’s one here.

The text accompanying photo #10 of the library’s exhibit says that the “…interior of the Daylight Theatre was originally likely designed by the architectural firm of Thompson, Daniels and Colthurst.”

A 1911 Saskatoon City Directory has the firm’s name correctly listed as Thompson, Daniel and Colthurst, and gives the individual names as Norman L. Thompson, T. Brammall Daniel, and G. Buller Colthurst. When I searched for additional information about these architects, the results included the Cinema Treaasures page for the Red Triangle Theatre in Plaistow, London, England, which was located in a 1919 building designed by T. Brammall Daniel. A directory of British architects working between 1834 and 1914 says that Daniel began practicing in Saskatoon in 1911, after having worked in Manchester, England, for a number of years. He must have returned to England not long after the Daylight was built, but the directory doesn’t say.

This opened on January 1st, 1917
you can see its ad at View link

The Paramount (formerly Daylight) in Saskatoon as well as the atmospheric Capitol Theatre were built and jointly operated by the Daylight Theatre Company Limited (owners Butler and Byers family) jointly with Famous Players Canadian Corporation. The Daylight Company was originally in partnership with the Allen Family. When the Allens went bankrupt, the receiver sold their interest in these theatres to Famous Players Canadian Corporation. The local families had to approve the sale.

Both grand opening ads uploaded in the photo section.

ScreenClassic is correct. The building has not been demolished. If you move Street View two clicks to the left you can still see the same roof-line it had as the Paramount.

This theatre has special significance to me as my mother was an usher there circa 1957 when she met my father. One of the last movies to be shown at the Paramount was Return of the Jedi.

Reopened as Paramount on September 1st, 1966.