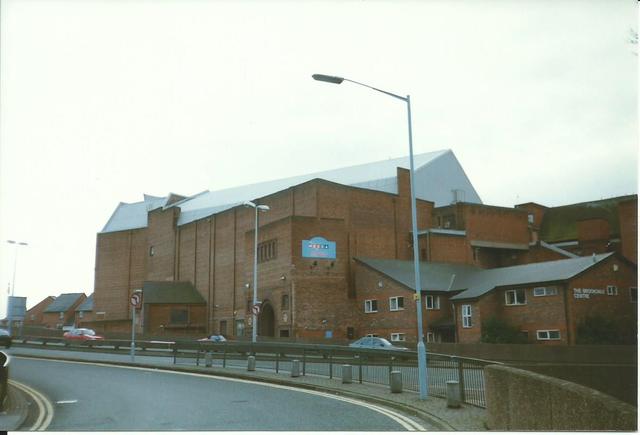 Chester’s first super cinema the Gaumont Palace, Brook Street, opened on the 2nd March 1931. It was originally going to be called the Regent Theatre and was designed by William T. Benslyn for Provincial Cinematograph Theatres(PCT). The mayor, John Morris performed the opening. Among the many in attendance were the architect and the sheriff of Chester, Robert Mathewson, who would later open Chester’s last super cinema the ABC Regal Cinema. The opening film at the Gaumont Palace was “On Approval” starring Tom Walls. A Compton 3Manual/8Rank organ was installed, played in the opening week by Leslie James.

The frontage was mock Tudor style and the entrance was likened to an Italian palace - the ceiling coloured blue and gold, relieved in red. The fan shaped auditorium’s ceiling was orange, relieved by green, mauve and red. It was stated at the time of opening that the balcony, seating 800, was probably the largest in Northern England. The cinema had a Tudor style restaurant called ‘The Oak’. The projection room was manned by seven projectionists and there were three Gaumont Eclipse projectors with turntables for sound on disc, which was never used. Later Kalee 21 equipment and Duosonic sound was employed. There was also a slide projector and spot. The stage was 30 feet deep and there were nine dressing rooms. Over its lifetime the Gaumont staged numerous live shows, including pop packages in the late 1950’s. The cinema finally closed on the 9th December 1961 with the film “The-Marriage-Go-Round” starring Susan Hayward.

After closure the building was converted into a Top Rank Ten Pin Bowling alley. Later it became The Top Rank Bingo Club. The original dome is still there hidden by a false ceiling. Unfortunately it is now flaking and a net has been put under. The Kalee 21s were installed in the Odeon until they moved up to Cinemeccanica in 1966. Today the building continues as a Mecca Bingo Club.

Here is a view of the rear and stage house of the former Gaumont Palace:
http://flickr.com/photos/ddvx/220870762/

Glady’s Coventry, who became Glady’s Barnes started work at the Gaumont restaurant in 1941 aged seventeen. Her weekly wage was seventeen shillings and sixpence, eighty seven and a half pence. The restaurant was open from 10am – 9pm, later closing at 8pm. A three couse meal could be had for one shilling and sixpence (seven and a half pence). When the price was put up to two shillings people complained, so a small coffee was added. Glady’s was in the restaurant cash desk for thirteen years and eventually became assistant manageress. A Mrs Sumpter and a Mrs Pincher’s carried out the cooking. Unlike today, tea, which was silver service, would be served to the cinema patrons. “Sugar was in cubes, not the packet type you get today.” said Glady’s. As for the food. Glady’s recalls the delicious cream cakes that were on offer. Glady’s served tea to several stars that performed at the theatre, including Adam Faith, Billy Fury and Cliff Richard, who sang to her. A Mr Bill Clarke was the last chef

The first Sunday show at the Gaumont was ‘These Glamour Girls’ and ‘Within The Law’ screened on 3rd November 1940.

Some images of the former Gaumont here (including the restaurant mentioned above:–

The former cinema is more to the south than on this map, on Brookdale Place, next to the canal.