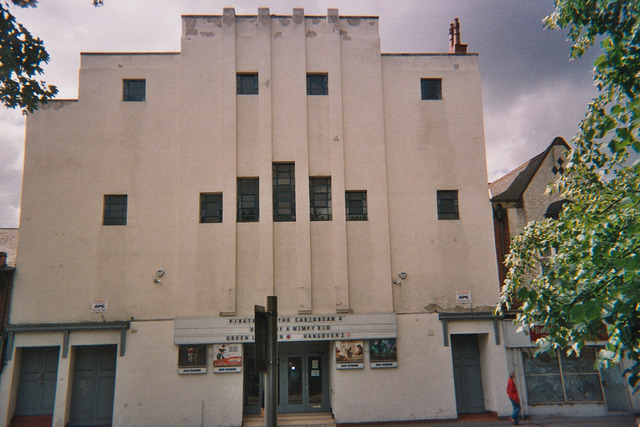 Located in Long Eaton, Derbyshire. Opened on 29th August 1907 as St. James’s Theatre, with the comedy play “The Blue Moon” direct from the Lyric Theatre, London. It was designed by architect C. Ross.

It was taken over by Leon Vint on 5th September 1910 and was re-named Vint’s Picturedrome, its programming consisted of films and variety shows at 7 & 9 twice nightly. Re-named Coliseum Theatre from August 1916 it became a variety theatre, and this closed in March 1923. It re-opened as the New Scala Cinema on 6th August 1923 with Rudolph Valentino in “The Four Horsemen of the Apocalypse”. By 1934 it was operated by the S. Graham Circuit of Nottingham.

It suffered serious damage from a fire on 2nd December 1934 and was substantially rebuilt to the plans of architect H. Hardwick Dawson of Nottingham, having been modernised into an Art Deco style. Seating was provided for 850 in stalls and circle. The proscenium was 30 feet wide, the stage 20 feet deep and there were four dressing rooms. Occasional variety shows were still held there. The Scala Cinema re-opened on 1st July 1935 with Warner Baxter in “Strictly Confidential”

The Scala Cinema closed in July 1964 with Cliff Richard in "Summer Holiday". It then became a bingo club for many years, initially Thurland Bingo Club. In 1991 a false ceiling was inserted across the auditorium, closing off the circle level. It was last operated by Silverline Bingo in 1993. The closed-down building suffered from another fire.

In 2004, the then empty, almost derelict building was purchased by a new owner who after many delays, set about converting the ground floor of the building into a triple screen cinema. A 70 seat screen re-opened as the Galaxy Cinema on 5th January 2007, and the two other screens seating 98 and 77 opened on 2nd March 2007, but closed around April 2012. The upper parts of the building may become either a bingo club, a nightclub or casino

A photograph and some details on the re-opening here:
View link

Apparently this closed around six months ago. At the weekend someone made a report too the police as they thought the place had been broken into, when they got there they found someone had set up a cannabis farm. www.thisisderbyshire.co.uk

A report in today’s local paper say’s there has been a fire at the building.

The Scala was the first cinema in Long Eaton to install a sound system and began showing Talkies from Monday October 24th 1929.

Nottingham Post 06/10/2020: Erewash Borough Council … hopes to turn the former Galaxy cinema in Derby Road into shops on the ground floor with “high quality” apartments above. The council is also aiming to convert the “dilapidated” former Box Office cinema and pub opposite the market place into a “cultural venue”.