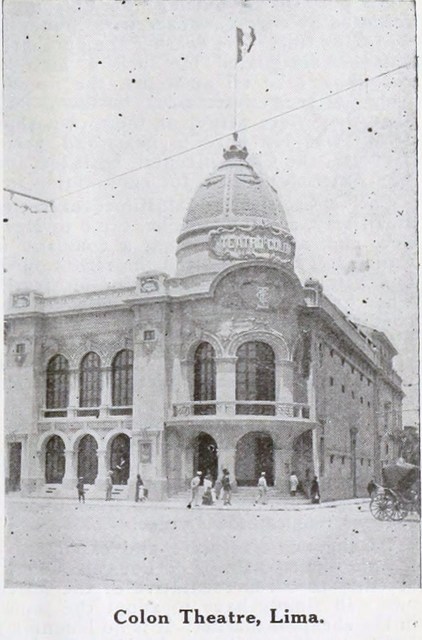 Located on the Plaza San Martin at the corner of Jiron De La Union and Jiron Quilca, the Teatro Colon is one of the oldest theatres in Lima, opening in January 1914. When first opened there was a large cupola over the corner entrance, since removed.

Originally built as a combined live theatre/cinema for the Empresa Theatre & Cinema Company, it had a seating capacity of 940. There were 305 seats in the orchestra level, 217 in the balcony, 400 in the gallery and 18 boxes at balcony level. Designed in a Beaux-Arts style by architect Claude Sahut who studied architecture at the School of Beaux-Arts in Paris. There is a small circular entrance hall which leads into a larger foyer area. The auditorium is long and not too wide. It is decorated with horizontal bands, which are broken by Corinthian pillars, supporting roof trusses that have stencil paterns. There is a deep stage and several dressing rooms.

The Teatro Colon screened the first sound film to be shown in Peru. It was for many years one of the main cinemas in the centre of Lima attracting the upper classes and elite citizens of Lima.