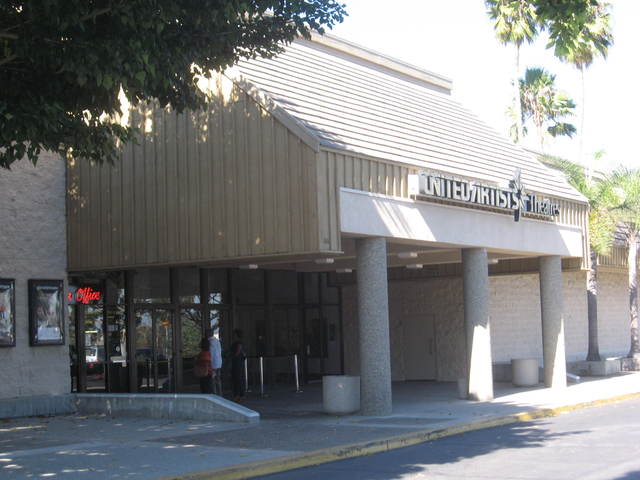 The Long Beach Marketplace 6 opened on December 17, 1976, with “King Kong” as one of its films. Other than periodic new carpeting, paint, wall covering and bathroom and seating changes to conform to the Americans With Disabilities Act, it has remained the same. All of the technical changes made behind the scenes to its sound and projection systems is not known.

In early-2002 all United Artist Theatres were merged, along with Edwards Theatres, into Regal Entertainment, which had been recently formed by Philip Anschutz. Its closest competitor is the AMC Marina Pacific 12, about a half of a mile away, which has about half of its screens devoted to stadium seating.

The small size of the UA auditoriums would probably make it impractical to add stadium seating but this doesn’t stop it from being a popular venue, probably due to the numerous restaurants around it. Sometimes they mix a few art films with their first run fare and the patrons are generally the older crowd. It was closed on March 17, 2020 due to the Covid-19 pandemic. It was announced in March 20201 that the closure would be permanent.

Oh, what fond memories I have of the Marketplace 6. All throughout junior high, my friends and I had a weekly ritual of biking over to the Marketplace, filling our jackets with sodas and candy from the Food and Drug store on the other end of the shopping center, buying a ticket for one movie and then sneaking in to one or two other movies before going home. Being able to see movies in the #1 house was always a treat.

December 17, 1976 grand opening ad uploaded in the photo section. Only King Kong was playing at the time.

My first job was at the this theater in early 82. The managers name was Josephine. She didn’t like me very much and let me go with the “summer crew” even though I had been hired months before the “summer crew”. :)

They also used to do Midnight Movies every friday. They always had Rocky Horror and then a few others they would cycle through…Dawn of the Dead, The Song Remains the Same, Quadrophenia, and my favorite Dance Craze. Kids would show up all decked out in mod/ska fashion and as the bands played on screen (The Specials, Madness, The Selecter, Bad Manners, The English Beat) all the kids would get up and and dance in the aisles…good times.

I was an assistant manager here for 3 years from 98 to 01. Before that I was also at the Brea Marketplace and Brea Mall Theatres. Upstair we still had the 35mm -70 mm projector for house #1. It also had Dolby Digital sound. #2 was SDDS while #6 was DTS. I left before the company merged with Regal. I loved working here and made some awesome friends.
The biggest frustration was the battle with AMC for product. I remember one forth of July we didn’t open a single movie, while they got Peferct Storm and Patriot. Despite that we got some strong product every now and then. Busiest I ever saw the theatre was Friday night of Austin Powers 2. Sold out houses 1 and 2 for every evening show. Had a great deal with the AMC GM too, we could see free movies there and they could come to ours as well. Lots of movie watching during this time. Ended up leaving to work for a few more theatre chains over the years. Still this play holds a specail place in my heart. Many thanks to Bill, Joan, and all the other managers with me for making my time with UA a joy. Fondest memory here was sitting outside on the cement benches with the team during the down time.

I worked at UA6 from 1981 to 1984. My brother worked there before I turned 16 so I’d spent a lot of time there getting to know the staff before I joined the crew. I saw Raiders of the Lost Ark there on opening night in theatre 1. I sat on the front row, even though I didn’t need to sit in front because the house was only half full. In case you don’t know, the ad campaign for Raiders of the Lost Ark wasn’t very good, so it took a little while for word-of-mouth to turn the movie into a hit.

Eventually, Josephine became a district manager and Connie became the manager in 1984. I left at the end of the summer of 1984. Then, in December of that year, Connie died in a car accident. Rumor has it that Josephine was so distraught about Connie’s death that Josephine left the movie theatre business. Nobody I know seems to know anything about what happened to Josephine after about 1985.

One of the guys who started working there is 1982 was Delfin Fernandez. He stayed in the movie theatre business and worked his way up. By the 1990s he was running a major chain’s operations in South America. In 2014 he retired from Hoyts, a theatre company based in Australia, after being their CEO for 9 years. Imagine it! And he started out with us right there at UA6.

One of our dear employees was Ward Wallach, who was enthralled with all things Japanese. His dream was to go to Japan and study there. And he did! But then in 1985 we were shocked to learn that Ward died in the crash of JAL Flight 123. According to his wishes, his ashes were left at a Buddhist temple in Japan.

I still keep in touch with friends from that theatre.

I have a million other stories.

Does anyone Know my best Friend Marsha Naify, she use to run that dump and then she was District Manager for that area. It was a dump in 1981 i could imagine what it looks like today.

This theater seems to be closed now. Clicking it on this full theater list leads to a dead page and google lists it as permanently closed. https://www.regmovies.com/static/en/us/theatre-list#CA

Regal / Cineworld Circuit closed the UA Marketplace in Long Beach along with all of its other locations on March 17, 2020 due to the COVID-pandemic. During the pandemic, Regal decided to make the closure permanent without reopening the venue.