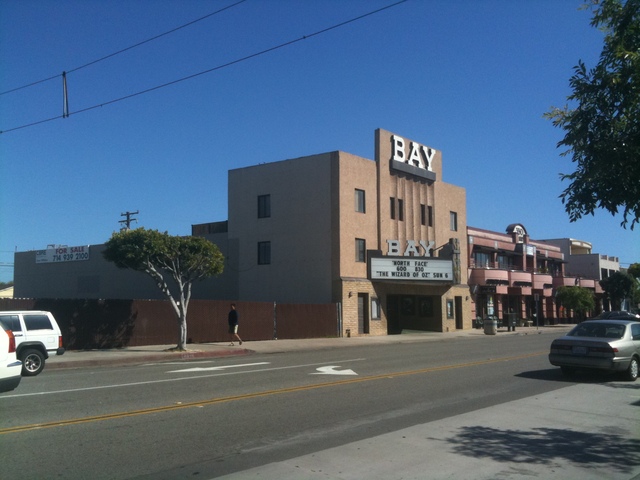 The Beach Theatre was opened Thanksgiving 1945, with 662 seats. It was taken over by Fox West Coast Theatres in June 1946 and was renamed Bay Theatre from June 17, 1946. It was purchased by Richard Loderhose in 1975.

After removing some of the seats, he installed a 1928-built Wurlitzer organ that he had purchased in the early-1960’s from New York City’s Paramount Theatre. It is called “the largest Wurlitzer pipe organ in any operating theatre in the world today”.

The theatre showed independent, foreign, classic and silent films with organ accompaniment. Seal Beach, with a population of 25,100, is mentioned in an unauthorized biography of Steven Spielberg as being his favorite place to see foreign movies while he was enrolled at nearby Cal State Long Beach in the mid-1960’s.

The theatre is well maintained, with excellent projection and the vintage seating is very comfortable. The Bay Theatre was closed ‘temporary’ on August 2, 2012. It was purchased by a new owner in 2016 with plans to renovate & restore the building to be used for the performing arts and movies. It is believed the Wurlitzer organ has been removed from the building.

In November 2017 Paul Dunlap of the Dunlap Group, owners of the building, announced that the roof had been replaced and work was beginning on demolishing the old stage house. An architect was working on the interior design of the project and they are looking at the designs for the front of house concession & restroom areas.

Their recording states that they will be “temporarily closed”.

As of November, no news of progress on hiring new staff or reopening the place. Not promising.

Hi all, please check out The Bay Theater Foundation: a nonprofit organization dedicated to buying and restoring the Bay Theatre in Seal Beach. Reach us at . Thanks!!

Newly-discovered information: The Bay was actually built in the late 1930s. It was then called the Beach. Independently owned and operated, and designed and constructed on a VERY tight budget, it was acquired by Fox West Coast and remodeled (much improved) c. 1947.

The Bay is currently for sale. Next door a giant building is currently being built. I am sure it’s an optical illusion, but it seems only inches away from this building. I would love to see the Bay reopen and play some wonderful old films.

The iconic Bay Theatre in Seal Beach has sat dark for the past four years, but a Fullerton-based developer with a penchant for historic buildings has recently made it his mission to purchase the venue and rehabilitate it for films, music and the arts.

With the Seal Beach City Council’s vote Monday officially designating the structure as a historic landmark, Paul Dunlap of the Dunlap Property Group is one step closer to breathing life back into the abandoned building.

Located on Main Street and Pacific Coast Highway, the single-screen theater has been a significant gathering spot for locals since it opened in 1947. It featured independent, foreign and classic movies on 35mm film for $8 admission until it closed in 2012. The noticeably large structure stands out among the boutiques and other shops on Main Street.

If all goes according to Dunlap’s timeline, he will close escrow on the $2.25-million purchase by December, and then he’ll apply for a conditional use permit and spend all of 2017 in reconstruction and redevelopment.

The building, including the interior, will be returned to its original aesthetic, sans the Wurlitzer Opus 1960 pipe organ, which was removed in 2007, Dunlap said. Once strictly a movie house, he said the theater will continue to show films but will also showcase performing arts.

A slight correction to the original article on the Bay. The Bay was not built in the late 1930s. It was built and opened in 1945 (Thanksgiving evening to be exact) as the Beach Theatre by Oscar Johnson. Seal Beach did not have enough of a population to support a theatre until after the Navy base was constructed in 1944, and even then it was dicey. Johnson sold the Beach in June 1946 to National General (20th century Fox). They closed it, did some renovations, and reopened as the Bay Theatre in July 1946. For the first ten years or so, the theatre was only open on Fridays, Saturdays and Sundays. In the late 1950s as the surrounding area population grew, a manager started doing foreign and arthouse showings on Tuesday thru Thursday.

The best way to get really accurate information on when the Bay (Beach) opened and reopened under Fox would be to check the B'Hend-Kaufmann Collection of the Herrick Library of the Academy of Motion Picture Arts and Sciences. I mentioned the Herrick Library images to him some time ago in an email—and he has posted images which I remember from that collection, or else identical images from another collection. Anyway, in addition to photos of the Beach/Bay, there is complete paperwork about the theatre’s sale, remodeling and reopening, including correspondence from Fox West Coast Theatres. It may indeed be true that it opened in 1945. But there was some information in the file dating from the 1930s. Perhaps that is when it was first planned.

Just watched a HGTV program on the renovation of the theatre and the apartment above it which was complete by show’s end. What happened to the renovation, which they showed in process, and the opening of the theater?