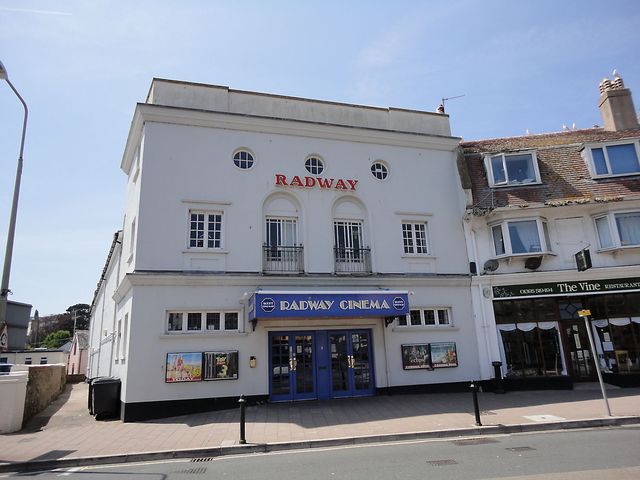 Located in the seaside town of Sidmouth, Devon. The Radway Theatre opened as a live theatre on 25th June 1928. It was designed by local architect P.E. Steadman. Seating was provided for 680; there were 520 seats in the stalls and 160 seats in the circle. The proscenium was 27 feet wide and the stage was 22 feet deep, with four dressing rooms. The auditorium ceiling is made of patterned pressed tin, an unusual material to use in the UK, especially in a cinema.

Soon after opening, talking pictures arrived and the theatre was converted into a full time cinema, to the plans of noted cinema architect William Henry Watkins. Little alteration was done to the auditorium, it was mainly the foyer area alterations and provision of a projection suite that he was responsible for. It re-opened as the Radway Cinema on 2nd December 1929 with Estelle Brody in "Kitty". In 1936 it was re-named Palace Theatre, but went back to its original name the next year.

In the 1950’s a wider 41 feet proscenium was installed and the seating capacity was reduced to 365. The cinema was closed in 1984 for modernisation and re-opened 17th August 1985 with "A Passage to India" under the current operator. Closed for further improvement in March 2000, the cinema currently seats 270.

Two further pictures from around 30 years ago here:–

I have not been but the screen size at 41' sounds very impressive.

Some of these old cinemas with wide prosceniums can have very impressive Scope screens, often larger than that on offer from many modern multiplexes.

I discovered further details for this cinema when researching for my now published book “Theatres and Cinemas of Sidmouth”. The original concept of the building was to have been a public hall but in the latter stages P.E.Steadman was asked by the proprietors – Radway Estates – to redesign the building as a theatre. This he did, mainly by altering the frontage and adding a projection and re-wind room for films. I found no mention of the architect William Henry Watkins being involved in this building. It did go over to films in December 1929 but soon reverted back to live theatre use. Strangely it was re-named “The Palace” for one year only, in 1936. It was used many times as a theatre during the 1930’s, through the war and well into the 1950’s. However, films were presented more than live shows and it was always regarded as a cinema. The proscenium was widened in 1954 for Cinemascope and again in 1966 when modern wall to wall curtaining was installed by a firm called “Modernisation”. It still survives today and is operated by Scott Cinemas with WTW Cinemas.