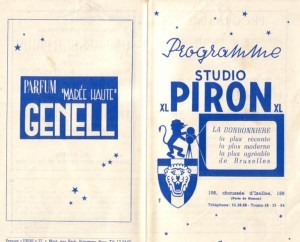 Located in Ixelles district, south of the city centre, near the Place Fernand clock town hall of Ixelles. It was opened as the Flora Cinema during World War I. In 1946, after renovating took place it was re-named Piron Cinema, after the Belgian general of the brigade in England during World War II.

This was a suburban cinema and a second run cinema of the Porte de Namur with a commercial programming, and after a short period of adult X-Rated movies, it closed in 1972. It is now a pet shop, specialising in dogs.