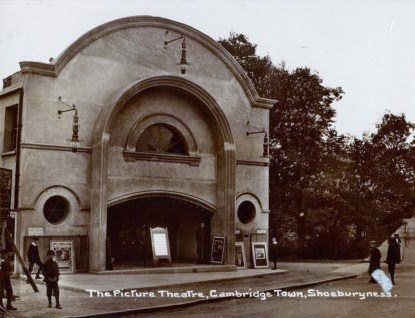 The Picture Palace was opened on 10th May 1913. Seating was provided for 580 in stalls and circle levels. It was soon re-named Palace Theatre, still screening films.

It was taken over by London & Provincial Cinemas Ltd. in the 1930’s and was modernised, being renamed Palace Cinema.

The Palace Cinema was closed on 5th March 1955. The building went over to retail use as a camping equipement store for A&B Leisure, which was closed in early-2008. The building remained vacant until it was demolished in March 2012.

Demolition of this cinema began 4 weeks ago…and has largely been completed as of today (23rd March 2012). The structure of the cinema was not suited to re-development into the flats destined for the site, and had suffered from neglect over the years. The plans indicate the facade is to be replicated in the new flat development. As a camping store since closure as a cinema in 1963, little remained of the interior after conversion, with the exception of the small balcony and the projector room which was used as offices. The last incarnation was a short term lease as a furniture shop which expired about 9 months ago while planning for the new development was underway. And so another piece of cinematic history dissapears forever….