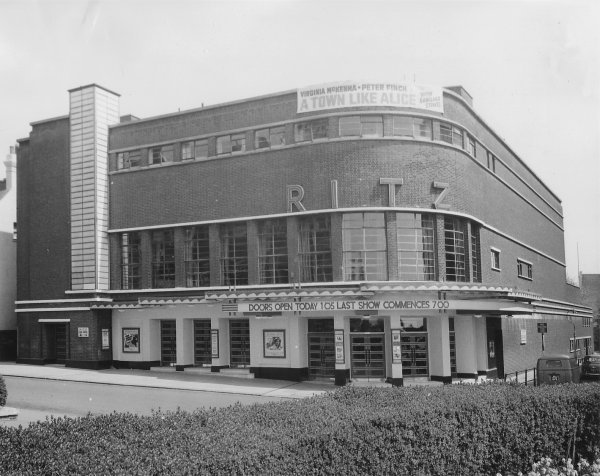 The Ritz Cinema was built by County Cinemas Ltd. and opened on 14th February 1935 with Anne Neagle in “Nell Gwynn”. The star of the film Anne Neagle appeared in person, together with the films' director and producer Herbert Wilcox. It had an imposing position located on the corner of Church Road and Grove Road beside Pier Hill and was designed by architect Robert Cromie with interior decorations carried out by noted cinema decorators Mollo & Egan. It was equipped with a Conacher 4Manual/12Rank theatre organ with Grand Piano which was opened by organist Quentin Maclean. The Ritz Cinema also had a large cafe from which patrons were given splendid views of the sea. The proscenium was 50 feet wide, the largest in the County of Essex.

In September 1939 County Cinemas were taken over by the Oscar Deutsch’s Odeon Theatres Ltd. chain. The Conacher organ was removed from the Ritz Cinema in 1946 and was installed in the Odeon Blackpool, Lancashire. Later operated by the Rank Organisation, they carried out a modernisation of the Ritz Cinema in 1956 and seating was reduced to 1,891. The cafe was later closed and converted into a ballroom, but eventually it became disused.

The Ritz Cinema was refurbished again in 1968 but closed on 29th July 1972 and was converted into a Top Rank Bingo Club. It was later operated by an independent bingo operator and re-named Invicta Bingo Club. This was short lived and the operation closed down in 1978 and the building became derelict. It was demolished in 1981 and the site lay empty for several years. The plot of land is now part of the Royals Shopping Centre.