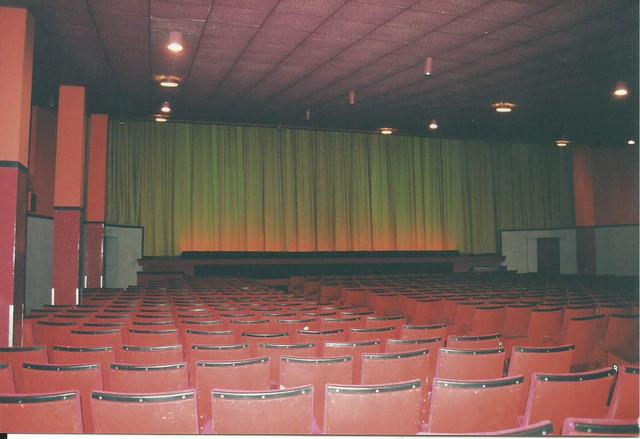 The site at 22 Alexandra Street has a very interesting past.

Before the current building that now houses the New Empire Theatre was built. The site has been home to the Empire Theatre, the Rivoli Picture House and then ABC Cinema.

The first major construction on the site was a small theatre which had been operating since 1896. With a general downturn in the music hall scene with the new moving pictures entertainment taking off the old theatre was closed.

A complete rebuild took place with the new cinema opening in 1920 to the plans of architectural firm Adams & Coles. There was seating for some 1,500, each seat giving an unobstructed view of the screen, two balconies housed the “family boxes” to provide entertainment before the film live organ music was played on a ‘straight’ organ.

The cinema played host to many of the great films of the day including “The Hunchback of Notre Dame” and “Ben Hur”. It is also reported that during the many Tom Mix and Buck Jones westerns shown the cinema would make the films even more lifelike by using small explosives at the side of the stage to co-inside with the on screen action! In 1928 a Christie 2 manual 8 ranks organ was installed and opened by organist Wilson Oliphant.

The cinema was upgraded to coincide with the dawn of “talkies”, then in 1935 the cinema became part of the Union Circuit Group, soon to be taken over by Associated British Cinemas(ABC). In 1936 the organ was rebuilt by Wurlitzer. In 1957 the organ was reported as being unplayable.

The cinema was closed in November 1961 to begin a major refurbishment.

After a six month shut down the cinema re-opened on Thursday 7th June 1962 as the ABC, it had undergone a 100,000 pound re-fit making it on of the most modern cinemas outside London and Southend’s first luxury cinema, however seating capacity had been reduced to 1,226.

The first film to be shown at the new cinema was “Escape from Zahrain” directed by Ronald Neame and starring Yul Brynner and Sal Mineo.

The cinema was the first to open its own club called the Marine Bar, and in 1976 gained Sensaround. The single screen cinema was closed in early-1980 to be converted into a twin screen cinema, the work completed by May 1980 with seating again reduced by 248 to accommodate 680 seated in the down lower screen 1 and 298 in the upper screen 2.

The cinema was to change its name to the Cannon in the late-1980’s but reverted back to the ownership of the ABC in the mid-1990’s.

The ABC was closed as a cinema in January 1998 after increasing costs and reducing use after the opening of the new Odeon multiplex at the top of the High Street.

The building became the New Empire Theatre, which re-opened on 10th October 1998 with a production of “Little Shop of Horrors” in the main house. The former screen 2 area, which had no stage facilities was converted to be used for ‘studio productions’.

Sadly, 10-years later on 7th November 2008, the landlord called in the baliffs over non-payment of rent, and the New Empire Theatre was closed down. At 8am on the morning of 26th July 2015, the derelict building was badly damaged by a fire. It was demolished in March 2017.

The Empire Theatre was built in 1896 and closed in early 1920 for conversion by George Coles and Adams into the Rivoli Cinema.

The Rivoli Cinema opened on 31st May 1920 and it had a cafe and a church organ was installed. In 1928 it was equipped with a Christie 2Manual theatre organ which was rebuilt in 1936 after Union Cinemas had taken over operating the cinema. It was rebuilt with additional ranks as a Wurlitzer 3Manual/10Ranks instrument.

The auditorium of the ABC at its re-opening after modernisation in June 1962:
View link

Ken, I don’t know where and how you found these lovely hi-res pics, but how you’ve taken me back – on Saturday the 9th June 1962 I was in there watching the matinee of Escape from Zahrain ! (My dad had a music shop over in Weston Road and was given weekly passes to all the Southend cinemas in exchange for displaying posters and advertising material for the week’s films… )

There are reports of a fire at this cinema.It is reported in the local news paper, the fire service were in attendance around 8 am this morning 26-7-15.

Some photos taken in November 2007, shortly before the New Empire Theatre was closed – sadly I did not get upstairs to the former balcony.

After many years of gradual dereliction, and the devastating 2015 fire, Hong Kong-based Sky Eagle Properties Ltd bought the building in 2016 for £750,000. Their planning application seeks permission for 24 flats, with shops and a community centre on the ground floor. As can be seen from my series of photographs, demolition took place between October/November 2016 and August 2017. This seemed an inordinately long time, although I believe at least two demolition contractors were involved, as the Victorian bricks in the fly tower were carefully removed and crated up to be reused.

could this link be especially related to this cinema? No address on the advertisement, however http://www.originalposter.co.uk/fulldetails.asp?rid=19096