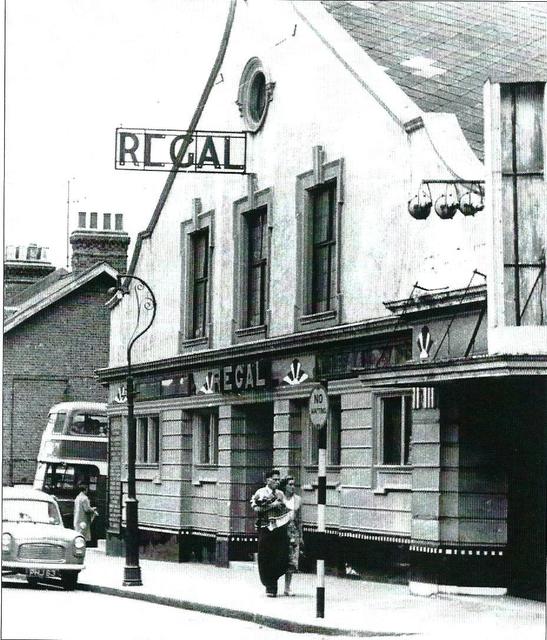 In Southend-on-Sea, Essex, the plans for the Arcadia Theatre were approved by the council on 17th June 1919. The theatre was built next to the town’s fire station. The owner was Herman Darewski.

The theatre opened on 16th August 1920 with a variety show, top-lined by tenor John Luxton.

In August 1921 ownership transferred to Herbert Jay, who had interests in many London and provincial theatres and touring companies. That October the theatre was closed. After renovation and re-decoration it re-opened on 27th February 1922 as the Ambassadors' Theatre. The opening play was “The French Dancer”, with Jane Wood. Thereafter programmes changed weekly.

The seating capacity was 800, on a single floor. On each side of the auditorium, separated from the main body of the hall by a low balustrade, were lounges, connected by a promenade at the rear of the hall, where patrons could take tea during the performance.

In 1923 the lessee was Mr H. Hodgson-Bentley, who founded the Southend Repertory Company that presented plays at the theatre.

In June 1929 he sought to dispel rumours that the theatre was about to close, while admitting it had suffered a bad season. Nevertheless, in August 1930, a new share issue of £2,700 was fully subscribed by the public and the theatre was redecorated to designs by architect Andrew Mather.

Despite this, as sound films became more and more popular the theatre closed, on 18th April 1931. The final play was “The Girl From Upstairs”.

After suitable works had been carried out the building re-opened, on 1st November 1931, as the Regal Cinema, with “Dirigible”, starring Jack Holt and Fay Wray, and Betty Bronson in “Lover Come Back”. There were now 1,000 seats; the lessee was Southchurch Entertainments Ltd.

The Regal Cinema had a few successful years, but the arrival in the mid-1930’s of three large cinemas (Gaumont, Astoria/Odeon and Ritz) adversely affected business, and the Regal Cinema closed on 16th November 1935 with “Cavalcade”, starring Diana Wynyard and Clive Brook.

The Regal Cinema re-opened on 26th December 1935, once again as a theatre, presenting variety shows and occasional stage plays. Seating had been reduced to 756. By 1941, it was part of the Regis Theatre Group.

In 1946 permission was received for alterations that included increasing the capacity to 836.

In the 1950’s ‘nude’ reviews were introduced in an attempt to boost audiences. Phyllis Dixey (“The Girl the Lord Chamberlain banned”) appeared in some of these.

But this was to no avail, and audiences continued to decline. Finally, the theatre was put into the hands of liquidators, and the Regal Theatre closed on 23rd October 1954 with “Crazy Dames”, presented by the Forces Showtime Company.

It was hoped that local amateur theatrical companies might pool their resources and buy the theatre. But this did not happen, and the building was sold for around £20,000. It was used as a warehouse, but then demolished in August 1963, together with the surrounding buildings, and the site became one of the town’s main car parks.

For those who visit the York Road Car Park, the site of the Regal Theatre is that part of the car park that is on the opposite side of the road to Dencora Court office building.