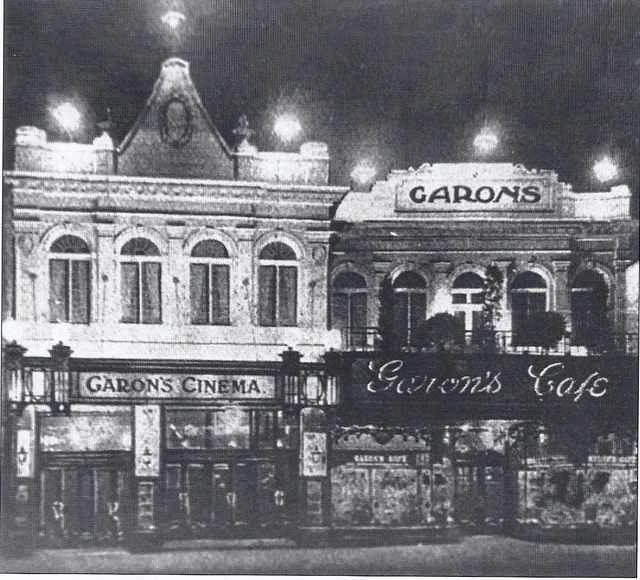 In Southend-on-Sea, Essex, on 29th October 1910, local businessman Harry Garon announced his plans to build a cinema and café in the High Street.

Garons Imperial Bioscope duly opened on 27th July 1911, with 600 seats. The panelled walls of the auditorium were painted white. The screen was 18ft square. The large café seated 300.

Harry Garon died soon afterwards, and his business interests were managed by his son, Harry Frank Garon. On 22nd March 1912 he announced he had acquired the sole rights for the district of the famous Kinemacolor process, and he would be reviving screenings in the town (they had previously been presented at the Kinemacolor Theatre in nearby Warrior Square).

In 1921 a two-manual Estey organ was installed, mounted below stage level (not on a lift). This was played by local sisters Ena, Celesta and Florence Baga (Ena and Florence - as Florence de Jong, following her marriage to band leader Harry de Jong - later became famous as cinema organists). In 1927 this organ was removed to St. Luke’s Church, Southend, and was replaced by a two-manual Christie, opened by Nelson Elms.

Rita Legget and her trio played in the café during afternoon teas.

During 1920, a fine ballroom was added above the cinema, which was renamed simply Garons Cinema.

In 1929 the cinema auditorium was extended, increasing the seating capacity to 916. Sound equipment was installed, the first ‘talkie’ being “The Wolf of Wall Street” starring George Bancroft and Nancy Carroll, on 14th October 1929.

During the intermissions, at each side of the screen, fountains would send up jets of water about three feet high, illuminated by coloured lights. These survived until 1956, when a wider screen (though not CinemaScope) was installed. The Christie organ had been removed to St. Stephen’s Church, Prittlewell (a district to the north of Southend town centre) the previous year.

The Garons complex closed on 4th May 1963, the final films being “Atlantis, the Lost Continent” starring Anthony Hall and Joyce Taylor, and Clark Gable and Sophie Loren in “It Started in Naples”.

The building was very promptly demolished. Shops and offices were built on the site.