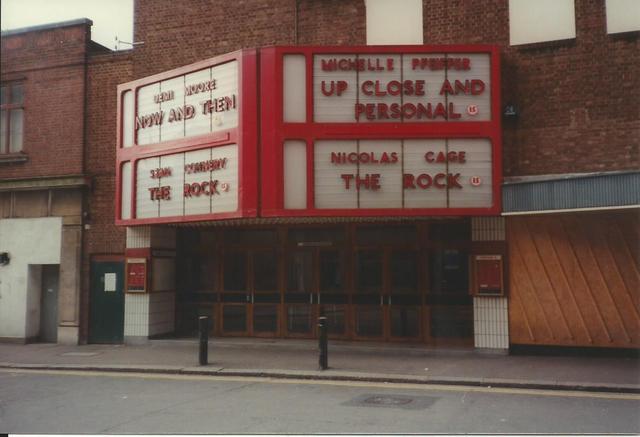 Located in Southend-on-Sea, Essex. A large and lavish cinema, the Astoria Cinema opened in a Moderne Streamlined style, with 2,750 seats on 15th July 1935. It was one of several Astoria Cinema’s opened in south-east England coastal towns in the mid-1930’s.

It had a 56 feet wide proscenium, a fully equipped 40 feet deep stage with 14 dressing rooms and a Compton 4Manual/10Ranks organ with a Melotone attachment and an illuminated console. All lighting in the pink and bronze auditorium was indirect and the decorative scheme was carried out to the plans of interior decorators Mollo & Egan. There was also a café/dance studio.

The exterior was finished in polished beige artificial stone with three large arched metal windows above the entrance - not unlike the Whitehall Theatre in London.

In June 1936 it was taken over by County Cinemas, and in September 1939 they were taken over by the Oscar Deutsch chain of Odeon Theatres Ltd. It was re-named Odeon on 9th June 1940.

It was equipped with CinemaScope in 1954. It had a major refurbishment in 1960 when seating was reduced to 2,286 by way of increased leg room.

Closed on 7th January 1970 for a complete reconstruction involving creating Odeon 1 cinema in the old cafe area seating 500, and extending the former balcony forward to create Odeon 2 with 1,350 seats. The new result was a comfortable but rather bland auditoria which re-opened on 4th November 1970. A new entrance had been created on the side of the building which had originally been an exit.

A supermarket was created in the former stalls and stage area, and used the original main entrance.

The Odeon was closed on 5th April 1997, due to a new 8-screen Odeon multiplex which had opened in the town centre on 22nd November 1996.

The Odeon stood unused until it was was demolished between July 2004 and January 2005. A University of Essex campus building has been built on the site.

I can confirm that demolition of this Odeon was completed by January 2005, and the site is now levelled ready for new building work for the college. My colleague Peter Hammond and i were among the last to enter the building, and took much photographic material for posterity. Several useful items of cinema related equipment were also removed prior to demolition. The seating and the best of the projectors had been removed shortly after closure and laterly some of the sound and lighting equipment and curtaining was utilised in a local theatre. In all honesty, apart from the sculptured ceiling and a small amount of plasterwork on one wall of the original Circle holding area, all traces of the building’s Art Deco heritage had been swept away in the 1969/70 re-build. Traces of the original hydraulic orchestra pit were still visible, and the organ pipe chambers were still traceable. Despite reports, the original entrance and facade has also been demolished along with the auditoria.

Any chance of some of the pictures you took for my sons homework?

A 1971 photograph showing the ‘new’ entrance on the side of the building, which was formally an exit. The original main entrance, foyer, stalls seating area and stage were by this time being used as a supermarket.
View link

I beleve the seats from the Southend Odeon still surrive and amazingly are still in the town!

From what I can rember the original ABC seats were removed when it closed so when the new owners took over they got talking with the Odeon owners and got them free or at a greatly reduced cost.

Also the projection equpment from the Odeo was saved and went to a working Preserved cinima “up North”.

Hope this is of some intrest and help, at least the Twin domes of the odeon were kept.

The Compton organ in this theater was a 4/11.

The Odeon cinema was enormous. whilst in its multiplex mode, the Supermarket was right at the front and I think, was called Fine Fare; certainly the house colour was yellow and blue. It occupied the foyer area of the original cinema,( not the back: see above) which was bigger than most cinemas. Overhead there was a circular opening (part of the upstairs foyer) which you could look over to the main foyer. Sometimes there were exhibitions upstairs. Notably the Police put on a large crime detection and road safety exhibition where they showed a fascinating range of weaponry; knuckle dusters axe handles etc. etc. They even had a machine for testing the braking responses of drivers.

The main cinema had six entrance doors into the auditorium and at the sides there were holding areas where you could stand and at least not miss the big picture. I saw the first cinemascope film there, ‘The Robe’, with my parents and only got a seat about an hour into the film. It was 1/6d (seven and a half p to get in,for adults and, half for children.

The judging of the Southend Carnival Queen was sometimes held there and this was the only time that I ever heard the organ being played. I like modern architecture a lot but the current College building on the site now is an abomination.

“U” rated film.SOMEONE explain the British rating system to me.Why can’t they just use the MPAA.

I think the u is short for Universal(British rating system), like the g rating in Australia(i think?). Different rating company in tne UK, to the one in the USA i think Mike!!?

Yes, it’s the BBFC (British Board of Film Censors) in the UK. The ratings system has evolved over time, though local councils can override the BBFC rating if they so wish (can be either way, more, or less restrictive than the BBFC rating). An example of this might be a film being shown in a town used as an extensive location whilst the film was being shot, perhaps with many locals as extras. A local council might downgrade the BBFC rating from say 15 (nobody under that age allowed in) to a 12A (children permitted accompanied by an adult/guardian only), if many extras were children in the film being shown. Also, different countries have differing ideas about what we can, or cannot see, based on that countries’ culture. So, a religious film in Britain may well be ok to show, but it might not be shown at all, or heavily edited to be shown in Northern Ireland, and the Republic of Ireland will decide for their audiences too.