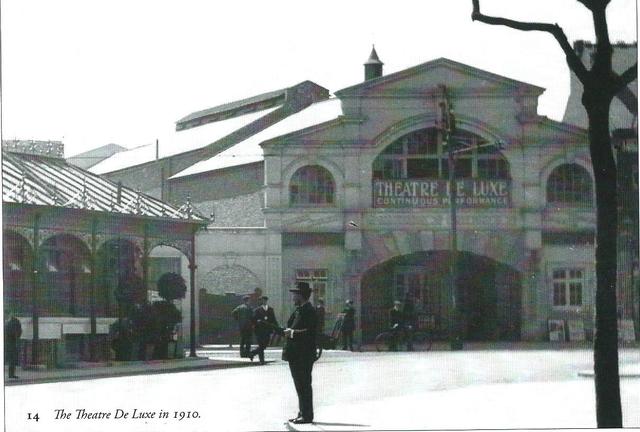 In Southend-on-Sea, Essex, the Theatre de Luxe was situated on London Road, in the town centre near its junction with High Street. The area is known as Victoria Circus, and the site of the former cinema is opposite the present Odeon multiplex, roughly where a W. H. Smith store stands.

The Theatre de Luxe opened during the third week of October 1909. It was owned by Electric Theatres (1908) Ltd., who had a number of other cinemas in London and the provinces.

In 1919 the left-hand auditorium wall was straightened, and a balcony was added. This increased the capacity to 820 in the stalls and 210 in the balcony.

On 7th August 1923 the cinema was badly damaged by a fire in the roof. Unfortunately, although the building was insured, the fittings and seats were not. About 610 seats, valued at around £2,000, would have to be replaced. The proprietor, by then Mr H. Kessler Howes, could not afford this, so the cinema closed.

In due course the building was used for indoor golf, then as a fund-collecting centre for Southend hospital. In February 1929 it was in use as a soup kitchen.

During November 1931 two local businessmen were interested in converting it into a modern theatre for repertory plays, but this scheme never got off the ground.

The building was finally demolished in May 1936, and the local, family-owned, Dixon’s department store was extended over the site.

More recently, a W. H. Smith store, with a snooker club above, have occupied the site.