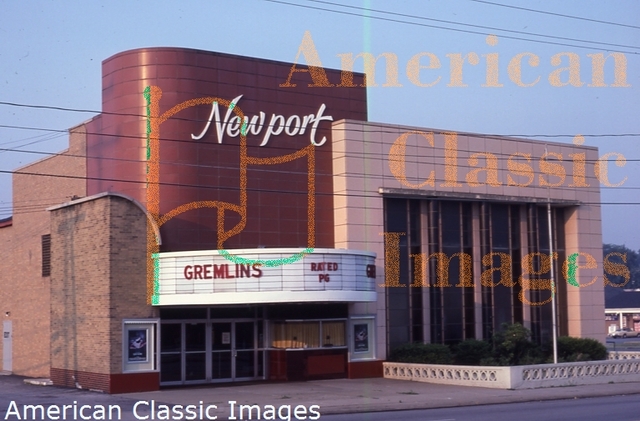 A neighborhood theatre that opened January 15, 1942, the Newport Theatre was an Art Deco structure located on the city’s far south side (listed in editions of Film Daily Yearbook as being located in Boardman, OH). Its notable features were its Art Deco facade and marquee. The Newport Theatre was still open in October 1973.

After sitting empty for several years, it was demolished to make way for … a new Burger King!

Any interior pictures of the Newport?

Here is the write-up for when the Newport Theater. The theater was actually opened January 15, 1942.

thank you Wolfgirl500. I wondered if there were pictures of the Newport other then the exterior.

Thanks for the Vindicator page for this and other Y'town theatres!
The articles are interesting and it’s fun to see the old movie ads again! Brings back many memories.

Question: The Newport adopted a “Conventional Dress Policy” sometime in the 50’s and/or early 60’s. It was mentioned in all of their ads in that period. I believe the policy ended when Pete Wellman took over full control. Did this policy actually dictate how “dressed-up” people had to be before they would be granted admission?

I don’t know much about the Newport, other than what has already been posted. I do know that, I believe in the late 80’s, there was a fire at the theater. I’m not too sure on whether they had closed by then though.

YOUNGSTOWN – Alice Raful Lev, passed away on Dec. 14, 2016, and she was born on Dec. 22, 1925, in Akron, to Joseph and Molly Raful. She was the second of three children, having an older brother, Robert Raful, and a younger sister Carol Tager. The family had movie theaters in Cleveland and then Newton Falls, where she spent most of her childhood.

About 1941, the family moved to Youngstown, where the family built and opened the Newport Theater, a state of the art theater on the south side of Youngstown. Alice spent her senior year in Youngstown and graduated from Boardman High School. In Youngstown, there was a large Jewish population and it was there that she was able to meet and date some Jewish men for the first time, including her future husband, Irving.

Not really at ease with the country club life-style of many housewives, Alice got involved in a place where she felt she could make a difference, public service, and fighting for the rights of the disadvantaged.

After a lifetime of public service, in 1988, Alice was inducted into the Ohio Women’s Hall of Fame as a “community organizer and advocate for social justice.” She joins the ranks of other great Ohio women such as Harriet Beecher Stowe, Gloria Steinem, Annie Oakley, and Doris Day. The following is from their website.

“Alice Lev’s lifelong commitment to social justice has benefitted disadvantaged persons, women and minorities on the national, state and local levels. She was a member of the U.S. Civil Rights Commission Advisory Board and helped establish the Minority Business Division of the Ohio Department of Development.

She has served on the NAACP board, the Jewish Community Relations Council, Urban League, National Organization for Women and the Ohio and Youngstown Peace Councils. Alice was active on countless community organizations. She was a member of the Mahoning County Democratic Central Committee and was the chairman of the Ohio Chapter of Americans for Democratic Action.

Mrs. Lev, a licensed social worker, is a strong force for social justice, racial harmony, political activism and equal opportunity for all.

In her later years, it was impossible to walk along Federal Street in downtown Youngstown with Alice without many people coming up and thanking her for helping them get their first job, changing their life, loaning them money when in need, or many other things. Throughout her life, Alice had always tried to help people, taking her big small town heart out in the world and doing what good she could whenever it was possible.

Services will be held at the Shriver Allison Funeral Home, 292 Madison Ave. in Youngstown, on Monday, Dec. 19. Calling hours are at 10 a.m. and services starting at 11 a.m. There will be a private internment.

Once operated as part of the John G. Broumas Circuit until it went bust in 1967.

The exterior of this theatre is almost identical to the Beechwold/Camelot North/Drexel North theatre in Columbus, OH. The Beechwold was built in 1941.