The Trolley Corners Theatre, located across the street from Trolley Square, opened on December 23, 1977.

The theater was part of a $3.5 million complex by the Boyer Company which included Union Bank, Swenson’s Ice Cream Store, office space, a restaurant, and a parking terrace.

The Trolley theater chain was later acquired by Plitt Theatre, which became Cineplex Odeon and then Loews Cineplex. The theater is currently owned and operated by Westates Theatres.

The upstairs auditorium has 775 seats and was "the deepest slope theater in the city" when it first opened.* It is equipped for 70mm, and may be the only theater in the area that still has two projectors in its booth.

The surround speakers are hidden above the auditorium’s doors, which automatically close once the movie begins. On the outside walls of the auditorium are murals of the Sound of Music and Star Wars.

The screen is covered with a curtain that rises upwards. In 1998, Cineplex Odeon replaced all the seats in the auditorium, and in 1999 they installed an 8-channel SDDS sound system in addition to the existing DTS equipment.

Below the main auditorium are two smaller ones with about 315 seats each. Theater 2 did not have stereo sound when the theater was first built, but is now equipped for DTS. Theater 3 is equipped for Dolby Stereo. Neither theater has stadium seating.

The murals in the theater were designed and painted by Dale Christiansen, the general manager of Trolley Theatres.

On September 9, 2001, Westates Theatres took over management of the Trolley Corners theater after Loews Cineplex pulled out of Salt Lake City.

On June 3, 2004, the theater was closed. It is to be converted into a fitness center.

With the closure of the Cinedome, Wilshire, and Villa taking place in the last 10 years, Trolley Corners, with its 775 seat theater, was the largest venue in operation until its closure this year. Rumors among management insist that the main theater is haunted by a young boy, and transients would frequently be found sleeping under a few of the myriad staircases throughout the theater.

My wife and I saw a few films in the main room over the years (the last one was ABOUT SCHMIDT). It had a huge sprawling quality to it with a big screen to match. I wouldn’t watch a good Horror movie in that big room by myself. All that dark space and the Haunted rumors would creep me out. It’s sad to see the last big screen around here go. The other two smaller theaters were really going down the drain though and nothing special for sure. The last film I endured in the smaller theaters was FINDING NEMO, and the soft focused, underlit image didn’t help the worst animated movie I’ve ever encountered on the celluloid screen.

I am really going to this miss this place. I am only 18 years old, and I feel so priveleged to have been there. I used to go there with my dad all the time. I don’t believe I have seen a movie there in a number of years. I couldn’t believe my ears when I heard this was becoming 24 Hour Fitness! Ever since Larry H. Miller put in his ridiculous “Megaplex” theatres, people have been straying from one of the main points of going to the cinema: the theatre itself. I am really afraid that by the time I am 30 there will be no theatres left like this in the country.

I know what you mean, filmguy ! I’m 62 and live in Brooklyn. We once had over 250 theaters; many of them movie palaces. We now have less than a dozen, mostly crummy plexes. The nearest thing we have is the Loew’s Jersey over in Jersey City.

I was the manager of the Trolley Corners in ‘95-'96. I hadn’t been back in that building until last month when I returned to take a GMAT exam in one of the suites. While waiting to take the test I wandered around and lamented the loss of this great movie house. The two smaller auditoriums downstairs were dumps, and mostly overflow from the grand theater upstairs.

While I was there I exhibited such films as Independence Day, Twister, Broken Arrow, Batman Forever, Mortal Kombat and The Usual Suspects.

I have so many special memories of that place that I could go on for days. And not all of my memories were pleasant. The air conditioning in that place invariably failed on the busiest weekend of the year, the 4th of July. Every night I would have to climb the scaffold behind the big screen to ensure that no bums were trying to sleep up there.

The projection booth had reel to reel projectors which I was instructed not to use. But we held press and trade screenings there, so to avoid the hassle of building up and breaking down the films for one showing I broke the rules and ran reel to reel without incident. I was spoiled forever because I was able to see all of the films before they came out, and I got to see them on the biggest screen in a nearly empty theater.

The place has so much charm it makes me sad to see it gone. The box office was completely surrounded by a cage and overlooked the concession stand on the lower theaters. The place had no storage for concession supplies, so during peak times we used the upper projection booth, which was enormous and had plenty of room. But the old projectionist had a fit every time we did it. The booth was so large that we had several couches in there and spent many late nights playing cards. The two lower projection booths also overlooked the lower concession stand, and when we would interlock the two, the film had to run right over the top of it all. Patrons frewuently asked me if the film passing over their heads was some kind of gimmick or if it was fake. They were always amazed when I told them that it was actually the film they were about to watch.

Invasion Of The Body Snatchers, Dune, Red Dawn,the remastered Return Of The Jedi. 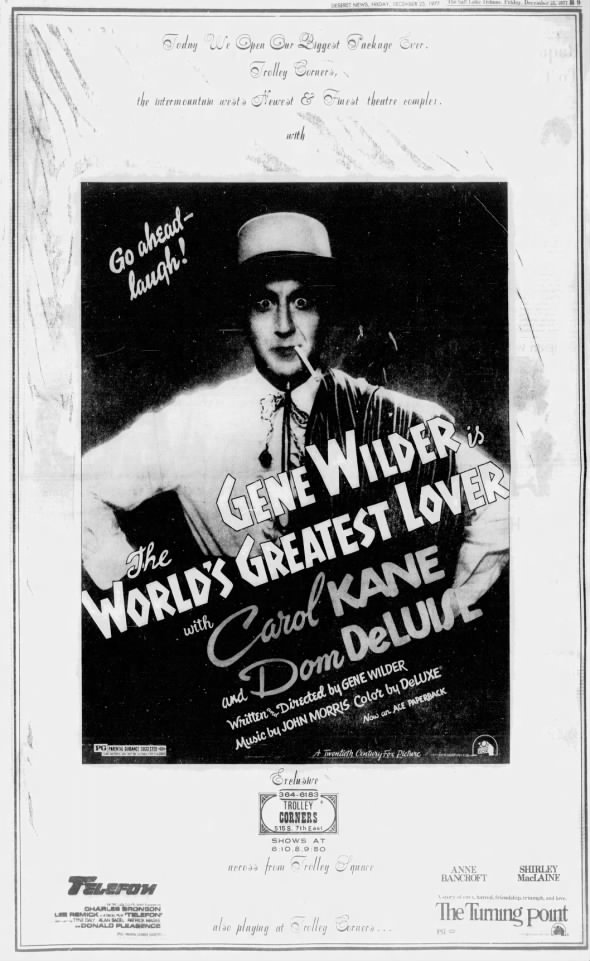