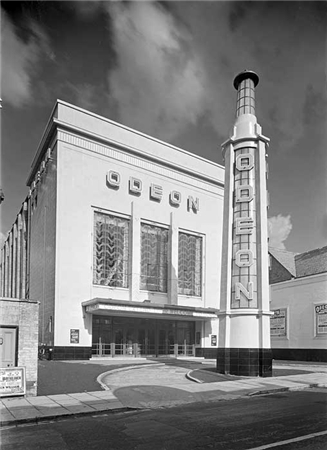 The Odeon opened on Wednesday 7th October 1936 with Freddie Bartholomew in “Little Lord Fauntleroy”. It was designed by architect George Coles, and was the 26th purpose built cinema for 0scar Deutsch’s Odeon Theatres Ltd. circuit.

The entrance was set back with a forecourt for those arriving by car with an illuminated pylon in front with a vertical Odeon sign, which when lit up at night was quite eye catching. The entrance foyer had an island paybox with two staircases leading up to the circle foyer and café. The auditorium walls had thin horizontal bands that led towards the proscenium and along with the ceiling was of Art Deco design. Two decorative towers set in the splay walls were lit with concealed lighting with a light fitting on the top. Seating was in grey and scarlet for 1,258; 766 in the stalls and 492 in the circle.

The Odeon played its circuit release supplemented by some Gaumont programmes, as Gaumont themselves had no cinema in Horsham. With the closing of the old Capitol Cinema in Horsham in 1954, Odeon took the opportunity to upgrade the Odeon and installed a wide screen with its first Cinemascope film screened in 1955. However, audiences continued to decline and the Odeon was one of the weaker Odeon’s that were sold off to Classic Cinemas chain and on 9th December 1967 it was re-named the Classic Cinema.

In May 1972 Classic turned the upstairs area into two cinemas. Classic 1 was the old circle with a screen raised up to that level seating 310 and Classic 2 was the old café area, seating 110. The former stalls seating area became a Mecca Bingo Club. Mecca themselves took over the running of the cinemas on 11th December 1973, renaming them Mecca 1 & 2. Both cinemas were closed on 10th January 1976 with “Bite The Bullet” & “The Omega Man” in Mecca 1 and “All Creatures Great And Small” & “The Beautiful People” in Mecca 2.

Bingo continued in the former stalls for a while longer but soon closed. After lying derelict for several years, the building was demolished in November 1981 and an office block now stands on the site.

The Odeon Horsham, photographed by John Maltby, at its opening in 1936:
View link

I was chief projectionist here with mecca