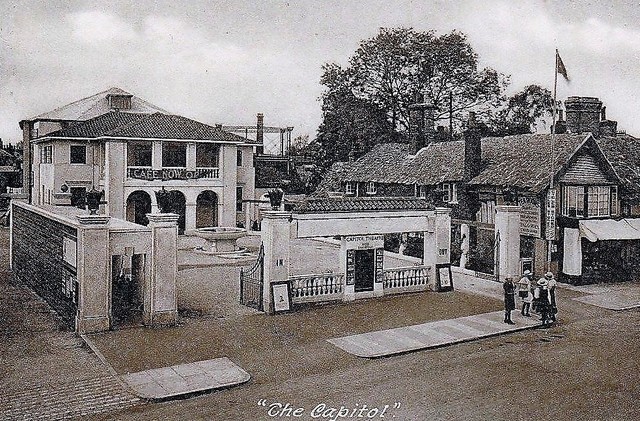 It was built for the Blue Flash Cinema Co. Ltd and was designed by architectural firm Goodman & Kay of Horsham in an Italian style. The building was set back from the street and was fronted by a Italianate garden courtyard which featured a fountain, an exact replica of one in the garden of the Villa Alban in Rome. Inside the auditorium seating was provided in stalls and circle levels and there were three boxes, each seating three persons. In May 1924 it was equipped with a Hill, Norman & Beard organ which was opened by organist E.S. Roper. The cinema boasted a cafe and dance hall for the convenience of its patrons. It had a stage on which to present live performances, and it was well used in the early years when the amateur dramatics of the Horsham Players presented many plays.

ABC closed the Capitol Theatre on 21st August 1954. It was then used as a community centre, and presented live theatre and later became a Regional Film Theatre for the British Film Institute presenting frequent film shows. It was closed 3rd March 1983 in favour of the new Arts Centre which opened in the former Ritz Cinema (now re-named Capitol Horsham) in December 1984. The original Capitol Theatre was demolished.