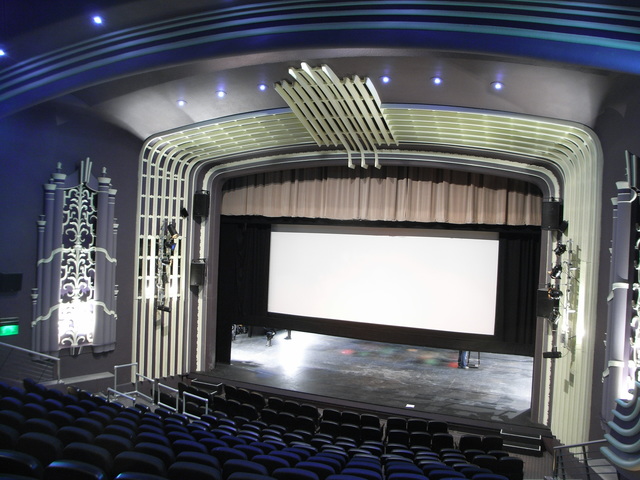 Located in Horsham, Sussex. The Ritz Cinema opened on June 13, 1936 with a seating capacity of 1,086 in stalls and circle levels. It was situated next to the Odeon Cinema (now demolished) and was designed by L. H. Parsons of Goodman & Kay with the better known Verity and Beverley acting as consultants. Built by Union Cinemas chain, it was taken over by Associated British Cinemas(ABC) chain in October 1937. The Ritz Cinema was equipped with a Compton 2Manual/4Ranks organ with Melotone unit.

It was renamed ABC from 20th February 1967 and was closed on 26th June 1982. It was acquired by the local council in preparation for upgrading and acting as a replacement for the Capitol Theatre, which being more centrally located, was required for demolition to allow for Marks and Spencers store to extend.

The front of the circle was extended forward, with arms going down to the front stalls area. A new stage with fly tower was constructed on land to the rear of the cinema and, retaining the Art Deco plasterwork and feel of the original cinema, a most attractive new theatre was created with seating for 450.

The Horsham Arts Centre closed in January 2002 and underwent a 6-million GB pounds refurbishment. It re-opened in September 2003. The building has been re-named Capitol (after the previous demolished Capital Theatre in the town) and has a live theatre, seating 423; 311 in the stalls and 112 in the circle. The two cinema screens seat 175 in Screen 1 and 89 in Screen 2.

This is a classic example of how to treat an old theater to create a vibrant modern facility with the style and feel of the old.

When I was a child in the early sixties, the cinema was called the Ritz, although it was already an ABC cinema. I used to attend the ABC Minors' Matinees on Saturdays with my brother – stalls 6d, circle 1s. The Odeon was a few minutes nearer to the Carfax on the other side of the road.

This Ritz had a 2 manual 4 ranks Compton Organ also a Meltone unit. Same as the organ at the Ritz Pencance

New photo added : Auditorium from the circle showing the proscenium and the Compton organ in front of the original screen tabs

Union built some gorgeous cinemas all over the U.K., , although the fame was short lived with a takeover in 1937 by ABC, whose cinemas were far less extravagant. ‘Ritz’ was a Union Cinemas trademark.Fortunately Horsham has survived , unlike many of the Ritz cinemas in The North , for example Huddersfield and Warrington and many others

Union did indeed build some very impressive cinemas and I would agree that many were more elaborate than some of the purpose built W R Glen ABC’s. However, many of the latter were the equal of the Union houses, for instance Plymouth, Bournemouth, Brighton and Southampton on the South Coast whilst in Yorkshire the Regals in Halifax and Harrogate were of equal architectural merit to the Ritz, Huddersfield.

Whilst ‘Ritz’ was the favourite name of Union, they were going to replace it with the corporate name, ‘Union’ and this they did in Kingston on Thames which was a Union acquisition. ABC reinstated the original ‘Regal’ name when they took over. ABC also often used the ‘Ritz’ name, for example in Leeds, Bradford, Sunderland, Gateshead and Wallsend.