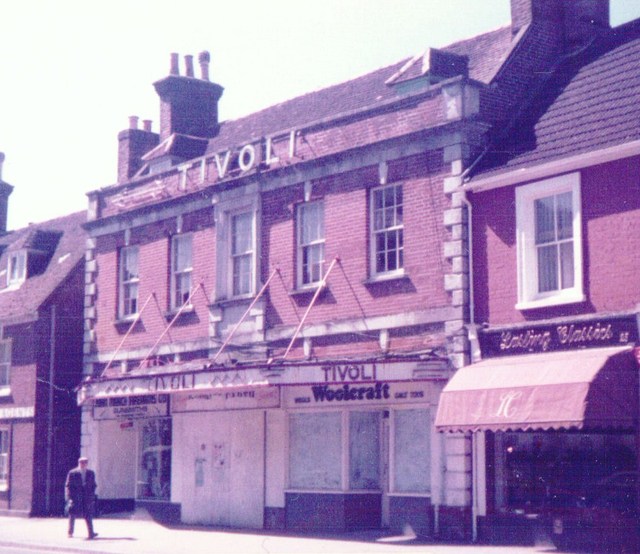 The Tivoli Cinema opened on 24th August 1936 with Jean Adrienne in "Father O'Flynn" and Shirley Temple in "Kid in Hollywood", with film star Jean Adrienne appearing in person. Designed by Bournemouth based architect Edward de Wilde Holding, the front of the building was an existing Georgian style building named Borough House. Inside the auditorium there was an attractive sequence of multi-coloured lights, concealed in troughs.

Initially an independent cinema, it passed to South Coast Theatres Ltd., then to the Myles Byrne Cinema chain, who operated it until its closure in April 1980 with the double feature programme "Convoy" and "Sweeny 2".

The building was purchased by Dorset County Council and it sat empty and unused until 1990 when the Friends of the Tivoli was formed. It took a further 3-years of hard work to get the building ready to open to the public again.

On 23rd November 1993 a production of "Alphabetical Order" was presented on the stage by the Wimborne Festival Theatre Company. Over the years further restoration work has been carried out and films are once again part of the programming, together with live theatre.

The multi-coloured lighting system in the Tivoli’s auditorium has now been restored to working order.

I met the former manager of the Tivoli about six years ago when he was employed as a film distributor. He was in the chair at the Tiv when it closed back in 1980. He told me that the cinema was doing very well at the time but they had a compulsory order to close since the building was going to be demolished for a road scheme, which never happened. Then as Ken Roe pointed out it sat derelict for the next ten years until the Friends Of The Tivoli got together to resurrect the old cinema.

As a regular visitor to The Tivoli Theatre I would urge any cinema enthusiasts to visit this gloriously restored theatre. The Friends of The Tivoli have done a wonderful job. If you happen to be visiting Bournemouth or Poole do try to schedule a visit. You won’t be disappointed.