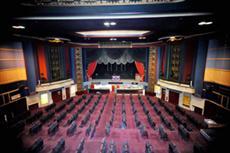 The Ritz Cinema opened on 23rd July 1937 with James Melton in "Melody for Two" and James Dunn in "Mysterious Crossing", plus a live show on-stage. Located on the corner of Abbey Street and Newtown Road, it was built for, and was initially operated by the Union Cinemas circuit, but they were taken over in October 1937 by Associated British Cinemas(ABC).

The Ritz Cinema is an imposing building on an island site, with a brick exterior. Seating in the auditorium was provided in stalls and balcony levels and there is some excellent detailed fibrous plasterwork. It was equipped with a Compton 3Manual/6Rank organ (with Melotone attachment) that had an illuminated console and was opened by Alex Taylor. The organ chambers were locacated above the proscenium, which had a decorative grille across the top. The cinema was re-furbished in the 1950’s and was re-named ABC from 13th November 1961.

Closed as the ABC on 29th October 1977 with "Exorist II", it was taken over by an independent operator the following day and re-named Ritz Cinema. The Ritz was twinned from 27th December 1979, with screen 1 using the balcony and front stalls area, and the 200 seat, screen 2 located in the former rear stalls under the balcony. In 1982, a small fire did damage to screen 2, but it was quickly repaired and re-opened.

The Ritz Cinema closed on 18th June 1984 and the building was sold to new owners. It was completely redecorated and refurbished and re-opened as the Ritz Bingo Club. Last operated as a Gala Bingo Club, it was closed in 2007, and remains empty and unused.

The building was designated a Grade II Listed building by English Heritage in October 2008.

Two photos of the Ritz taken in November 2010, the building is boarded up and is for sale with a national retailer apparently interested in the building.

The English Heritage listing report can be viewed here – some good indication of the style of the building:–

This was a regular relief for me… I usually got relief duties when there was advance boooking going on.. Wrestling, odd concerts and am.. Pantos….

Restoration plans and a history of The Ritz http://www.nuneatonhistory.com/uploads/1/8/6/8/18680466/the_ritz–the_future.pdf

Eight years since I was last in Nuneaton and little – other than increased vandalism – seems to have happened at the Ritz. Photos from June 2018

It appears that this building is not secure, There is a new report on The Derelict places website. The explorers found easy access to the building.