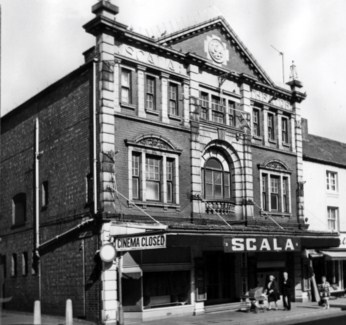 The Grand Theatre was opened on 1st February 1915, with a stage production of "Babes in the Wood". Seating capacity at opening was for 1,000 and the proscenium was 28 feet wide. Later in 1915, it was screening films as part of the variety programme. By September 1915, it was in cine-variety use, and had been re-named Scala Theatre. This name is still located in the stonework on the handsome Neo-Classical style façade. By 1927 it was operated by the Birmingham based Levy Circuit, headed by Sol Levy.

The Scala Cinema was damaged by German bombs and was closed for repairs for four weeks in August/September 1943. It was always independently operated. It became a bingo club in 1964, although films were still shown on certain evening during the week. The final films at the Scala Cinema were on 27th August 1977 with the double bill; Lilly Lamarr in "The Sexorcist" and Al Cliver in "Waves of Lust"(Una Ondata di Piacere).

The original architect is listed as being a local company H Mayo & Son.

The upper levels seem to have been converted into offices known as Scala House suggesting that the auditorium was gutted after closure. Windows have been inserted in the side walls. There is no trace of the original left in the amusement arcade.