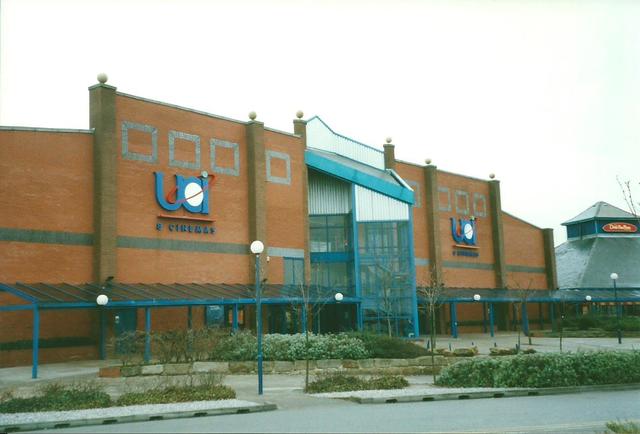 The 8-screen UCI opened on 16th November 1990. It was closed on 1st July 2004. Taken over by the Terra Firma Group who operated Odeon Theatres Ltd. on 28th October 2004. At that time Odeon were already operating their own purpose built 10-screen cinema and they never re-opened this one. It was demolished in early-2005 and a Curry’s electrical store was built on the site.

heres a photo taken around 1992
http://www.flickr.com/photos/woody1969/2120702873/
Hull was built as a CIC theatre before the merger of CIC and AMC to form UCI.
It was therefore a much better quality building than the AMC designs, the auditoriums had the seating in one block with side aisles, stages and curtains (like High Wycombe and Solihull UCI’s – both also CIC designed theatres), there was a mezzanine level in the lobby with offices upstairs.
The projection suite was all one room which made prgramming this theatre very flexible, you could interlock 35mm prints between any ajoining auditoriums, on really big blockbusters you could run one 35mm print across a max of three projectors.
Hull was a hugely competative and over screeened market and when the UGC opened , both the UCI and Odeon lost a lot of market share.
The UCI was built on the banks of the Humber and the car park was prone to flooding.
The owners of the retail park it was built in wanted to expand the shops (for a DIY B&Q superstore) so a deal was done to close and demolish the UCI and neighbouring Megabowl.
The seating capacities listed are wrong, the cinema was built as a square footprint, there were six auditoriums across the back and two at the front. The capacities were (i think) 152, 134, 236, 292, 292, 236, 134, 152.

This particular cinema holds a lot of fond memories. It was the first cinema we used to travel to when â€œshe who must be obeyedâ€ and I got our first banger (old, second-hand car). We would often see two or three films in a row and wait in the car or go to the Chinese restaurant across the way. We had to travel a fair distance too, and not realising that it had gone for good, we set of one early morning, and it had locked its doors for good and was ready, if unwilling, for the next faze. Total demolition. We were shocked and guttedâ€¦sad.

I highly doubt this comment will be read for a long time so I won’t hold my breath for a speedy if ever reply. In this very small corner of the internet.

Woody – How on earth did you find out all that information?

It is a real shame that there aren’t many photos at all of this cinema and non inside. It would be really great to remember what this cinema looked like inside. I have fond memories of this cinema but the longer it goes on the more faded the memories become.

If anyone has any photos then please post them.

Hi mindflowers…I agree, this now-gone cinema was our (as a couple) first cinema; gone but not forgotten :)

Hi mindflowers and Playhousegoer. Here’s the exterior photo I took when I visited the UCI in February 2002. No interior photos, I’m afraid.

Thank you for the picture David, very much appreciated. Brings back happy and fond times there with the wife…

Thanks for the image David.

It would be great to be able to see some images of the interior. There will be plenty out there in dusty cupboards I suppose. There will be many employees that used to work there that will have photos lying around somewhere.

Such a shame this cinema was knocked down. Maybe I am fond of it so much as it is no longer there and maybe if the current Odeon was knocked down instead and the UCI remained then I would have the thought process with Odeon.

I seem to remember that the interior of this cinema had a lot of character about it and felt very much like a classic cinema from the USA. It also had the ‘now showing’ old film list board with individual letters on the exterior of the building to the rear which was viewable to people passing on the Dual Carriage Way.

To me the history of this cinema and any ‘modern’ cinema is just as important as ones from 40,50,60 years ago.

Shame it only lasted around 10 years.