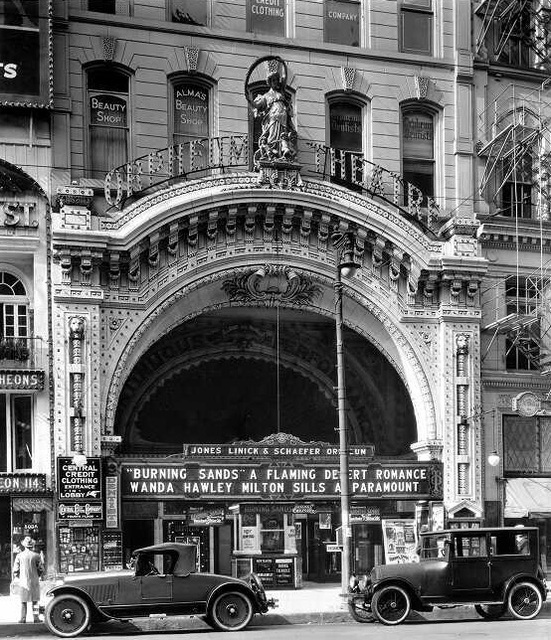 When the Orpheum Theatre opened on September 9, 1907, it was one of the largest vaudeville houses in the Loop at that time, and sat nearly 800. Designed by the firm of Holabird & Roche, better known in Chicago for their office towers than their theatre buildings, it was built for the Jones, Linnick and Schaefer circuit, which was founded by showman Aaron J. Jones.

Other Loop houses in the chain included the Bijou Dream, which was next door to the Orpheum Theatre, the Rialto Theatre and the Randolph Theatre.

The Orpheum Theatre was in a highly busy area, near the corner of State Street and Monroe Street, so it never had problems playing to packed houses. It featured "continuous vaudeville", from nine in the morning to at least eleven at night, fifteen nearly hour-long shows a day, stopping only to let one audience out and show the next in. At one point, daily attendance on weekends was over 10,000 a day.

The Orpheum’s façade was stunning, a masterpiece of Beaux-Arts architecture, and one of the most beautiful theatre facades in Chicago’s history. A two-story archway capped by a figure of a goddess was illuminated by electric lights and sparkling white terra-cotta, meant to resemble marble. Over the arch, a sea-shell pattern radiatated outwards from a terra-cotta peacock in the center. The words "Continuous Vaudeville" were inscribed around the edge in gold-painted letters.

Inside, the Orpheum Theatre took up the first two stories of a multi-story office building. The interior was decorated in the style of a late-19th century opera house, with a double aisle, a small balcony, and several "opera boxes".

An innovation which made the theatre particularly popular (especially during the often times miserably muggy Chicago summers) was its cutting-edge ventilation system, which blew ice-cooled air through the auditorium, a rare treat in early-20th Century public buildings in Chicago, which drew as many raves from theatre-goers as its beauty did.

Early on, the theatre’s management boasted it had the finest staff in any theatre in the city, as well as "high class entertainment". Thus, its patrons felt a bit less put-off by its dime admission cost, while most of the vaudeville houses in the Loop cost a nickel.

In 1909, Jones switched from vaudeville to movies, becoming one of the first theatres in Chicago to screen motion pictures (outside nickelodeons). Besides movies, the Orpheum Theatre began to feature sing-along slide shows. Its popularity remained as strong as ever.

In the 1920’s, Aaron Jones sold the Orpheum Theatre to Warner Brothers, which continued to operate the theatre as a first-run house until its closure around 1936 or 1937.

Unfortunately, this treasure of early movie theatre architecture was converted decades ago, first to a shoe shop, then a Burger King restaurant, and currently a menswear store.

Now you made me feel bad, after my pitiful Google search, when you researched the building back to 1872. You should have warned me.

Talking about the subject Broan was talking about that hes 95 % sure it is if you go on bing it shows you an old water tank and it might say Orpheum. They dpon’t make water tanks like that. Plus the roof is curved like a theatre, and just like he said its the same top. I to am 99.99 percent sure its the same building!

Disregard what I said earlier. If anything, the Orpheum was in the building that now houses the Men’s Wearhouse. The Orpheum closed in the spring of 1937 and was replaced by Kitty Kelly Shoes. So it is standing, just not in the building we thought. While Bryan’s article from Sept 8, 2009 says that it’s a new building, a previous article made clear that Kitty Kelly would heavily remodel the existing building.

My grandma used to work there!

Here is a great THSA photo.

Here is the recent article about some of the old Orpheum interior just uncovered.

Status should now be demolished.