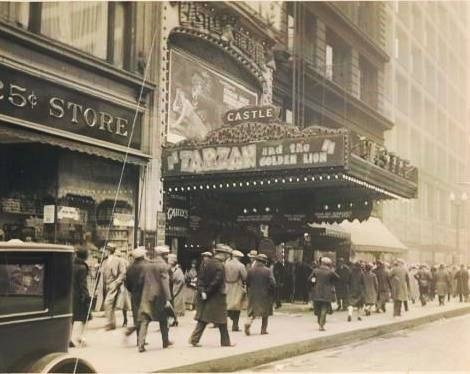 Built in 1915 and opened a year later, the Castle Theatre, located on S. State Street at W. Madison Street, was one of many movie houses that sprung up in the Loop in the first couple decades of the 20th century. The Castle Theatre was wired for sound films in 1929.

Three years later, its new owner converted it into Chicago’s first all-newsreel theater, with shows every half hour for 15 cents each. It predated the opening of the Telenews (later known as the Loop) and Today newsreel houses by nearly a decade.

The building in which the Castle Theatre was located has long since been razed. In the 1980’s, a large Toys ‘R’ Us store was built on the site, which closed several years ago, and has recently been divided into a couple retail stores, including Office Depot and Urban Outfitters.