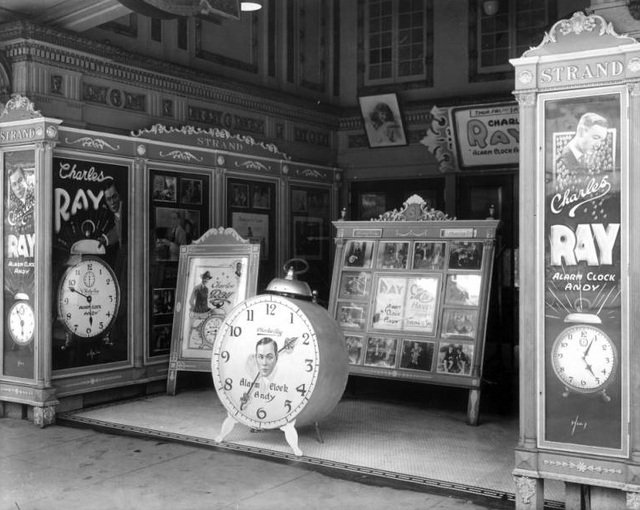 The Strand Theater opened September 30, 1915 with Mary Pickford in “Esmeralda”. It was remodeled and reopened as the New Strand Theatre on December 25, 1932 with Stan Laurel & Oliver Hardy in “Pack Up Your Troubles”. It reopened after a remodel and renamed Newmar Theater from December 12, 1948, screening Gary Cooper in Good Sam". It reopened as the New Strand Theatre on September 30, 1959. It was closed November 28, 1962. It was demolished in 1963.

The web site Birmingham Rewound has some interesting information about the Strand and about its next-door neighbor, the Capitol Theatre. In 1948, the Capitol was renamed the Newmar Theatre, but a few years later that house closed, and the operators took over the Strand and renamed it the Newmar. This name remained until September, 1959, when the house went back to being the Strand. The Strand closed on November 28, 1962, and was demolished in August, 1963.

The opening of the Strand Theatre was noted in the October 2, 1915, issue of The Moving Picture World:

“The opening of the new Strand theater in Birmingham, Ala., occurred Thursday. This house is to run all feature photoplays. The first star seen was Mary Pickford in ‘Esmeralda.’ The theater is doing a splendid business.”

October 2 was a Saturday, so (assuming that the magazine’s news was timely) the Strand opened on September 30.

I believe I may have seen the last film shown at the Strand—“Tower of London” starring Vincent Price. I was only 17, but definitely remember Vincent chewing the scenery.

Reopened as Strand again on September 30th, 1959. another ad posted.

In the photo section I have posted a couple of items from the Birmingham Rewound website. The first is a column in the Birmingham News from December 1962 lamenting the recent closing of the Strand. The second is a photo of 2nd Avenue with the Strand clearly visible on the left. The marquee is empty indicating that the theater is closed. The extravagant Christmas decorations of downtown during those days are visible and the street is gridlocked with traffic. Joe Vogel comments that the theater closed on November 28, 1962 and was demolished in August 1963. This would seem to indicate that the picture was taken during the Christmas season of 1962.

I recall seeing the Strand in the process of being demolished while going to see a movie at the Melba, which was directly across the street. While I had seen theaters closed up such as the Lyric, this was the first time I had seen one torn down. It would not be the last.