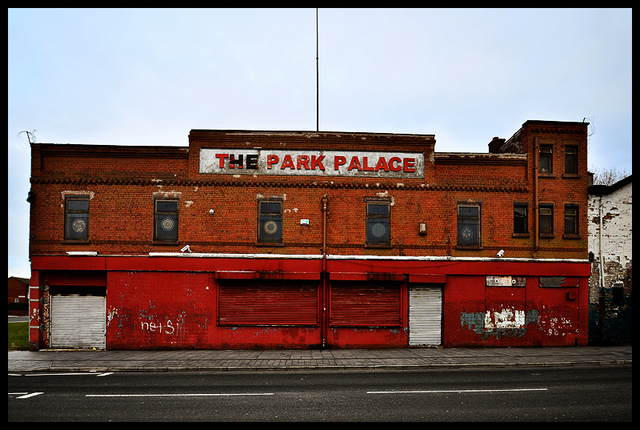 Opened on 4th December 1893, originally used as as a variety hall with seating for 600 in the pit and stalls and 500 in the circle. Many famous music hall stars appeared on the stage, including Charles Coburn and George Formby Sr.

In 1906 Jasper Reafern leased the theatre and began screening films with the vaudeville programme. The Weisker Brothers started to show films in 1910 and it was re-named the Park Palace Kinomatadrome (3rd in the country).

Sound films were introduced from January 1930 and the Park Palace Cinema was listed with 961 seats, a 30 feet wide proscenium, a stage and four dressing rooms. In March 1956, CinemaScope was fitted, the first film to be shown in this format was “Three Coins in the Fountain”.

The Park Palace Cinema closed on 11th March 1959 with Russ Tamblyn in “The Young Guns” and John Payne in “Hold Back the Night”. It then became a chemist shop, then a store for car spares. From 1984 it became the Mill Street Chapel. Re-opened in 2008, for first time in 50 years, the building was in use as a cultural centre and performance space. Sadly, by May 2010, it was closed and available ‘To Let’. By 2018 it was in use as Park Palace Ponies, where children could ride on real ponies.

Could this have been called “Barris Cinema” in the 1950s?