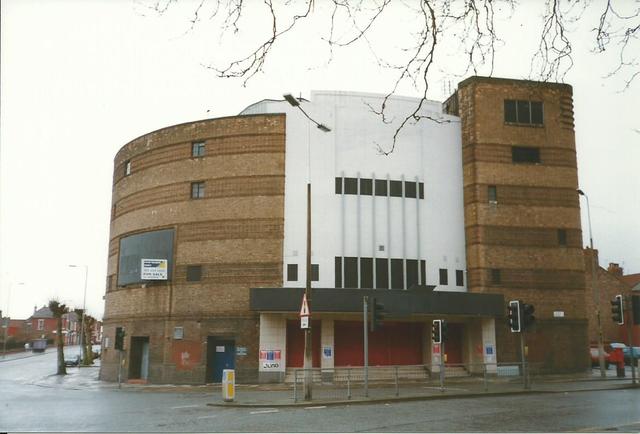 Built on the site of the Dingle Picturedrome, in the South Liverpool district of Dingle (Princes Park). The Gaumont Princes Park was opened on 27th March 1937 with William Powell in "My Man Godfrey".

The building occupies an imposing corner site on Park Road and Dingle Lane, bounded by Credington Street, and has a sweeping curve around the corner in its multi-toned brickwork. There is a central section over the entrance which is faced in cream and grey faience tiles.

Inside the auditorium there was seating for 900 in the stalls and 603 in the rather wide circle. The ceiling has a deep square central dome, which contains concealed lightings around its edges, and around the dome were a series of Art Deco light fittings (now removed). The proscenium, which was surrounded by troughs of concealed lighting, was 45 feet wide, and the stage was 15 feet deep, with four dressing rooms provided. In the orchestra pit there was a Wurlitzer 2Manual/6Ranks organ which had been transferred from the Trocadero Cinema, Liverpool. This was opened at the Gaumont by organist William Whittle. The Wurlitzer organ was played regularly into the 1940’s and 1950’s.

The Rank Organisation closed the Gaumont Dingle on 17th September 1966 with "Those Magnificent Men in their Flying Machines". It was immediately converted into a Top Rank Bingo Club, retaining the Wurlitzer organ, which was still used on occasions, played by Billy Ellis. It continued as a bingo club until it was closed by Mecca Bingo in 1998. The Wurlitzer organ was removed and is now located in the Theatre Organ Heritage Centre at Peel Green, Eccles, near to Manchester.

The building then stood empty and unused for many years. In the mid-2000’s, it was purchased by a new owner, who has plans to eventually use the building as a community centre. In 2009, it was being used as a rehearsal space for rock groups.

A recent photograph of the Wurlitzer organ console from the Gaumont Dingle:
View link

Vintage photographs of the Gaumont Dingle, and its Wurlitzer organ can be seen beneath the photo of the Trocadro(Gaumont) Liverpool here:
http://www.ukwurlitzer.co.cc/1664.html

Look on web for Gaumont Dingle for recent photos inside the building! These are also available on derelictspaces.co.uk urbanliverpool.blogspot.com 13.1.17.

Last operated by Mecca on bingo, not Top Rank.