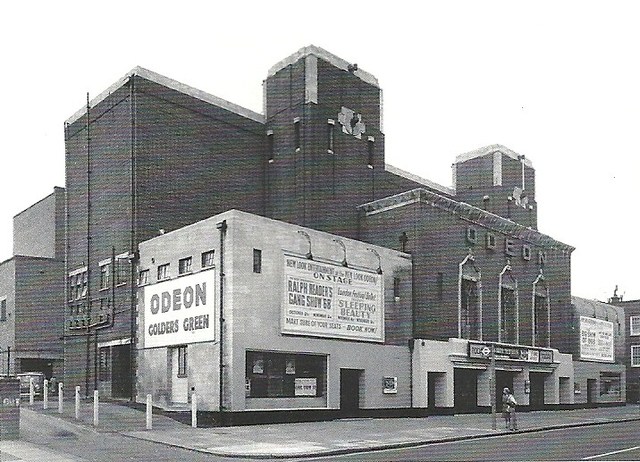 Located in the neighborhood of Temple Fortune, located halfway between the districts of Golders Green (a mile to the south) and Finchley (a mile to the North), which are in northwest London. The cinema was on Finchley Road between Childs Way and Birnbeck Close. The Orpheum Theatre opened on 11th October 1930 with Ronald Colman in "Condemned". It was built for an independent operator and was designed by the architectural firm, Yates, Cooke & Darbyshire.

The large cinema was equipped with a Compton 3Manual organ which was opened by Lewis Gerrard. The proscenium was 35 feet wide, the stage 40 feet deep and there were ten dressingrooms. There was a cafe provided for the convenience of patrons. Initially it operated a policy of Pictures & Variety. In 1932 it was taken over by Associated British Cinemas(ABC) and then from March 1934 it was taken over by the County Cinemas chain. County Cinemas were taken over by Oscar Deutsch’s Odeon Theatres Ltd. in early 1937, and the Orpheum Theatre was re-named Odeon in 1945. In its last couple of years of operation it was known as the Odeon Golders Green.

Although a cinema, there was also much use of the stage at the Odeon, even in later years, when Ralph Reader’s Gang Show (for the Boy Scouts) was an annual event, as well as many other touring stage shows and pantomimes.

In 1972, the Odeon was re-decorated prior to a visit by H.M. The Queen, when she came to see the Gang Show. Just two years later, on 27th April 1974, the Odeon was closed with the double bill programme “Digby, the Biggest Dog in the World" and "Doctor in Trouble". The cinema was just too big and too far from a major shopping centre to be viable in the lean cinemagoing years of the 1970’s. It lay empty and unused for many years, eventually being demolished in May 1982, and a block of flats was built on the site.

Only the stage house and a section of the right hand side of the front of the building remain standing in this May 1982 demolition photograph:
View link

After closure Rank proposed to use this as a Sundown balroom/nightclub.However because there were restrictive covenants restricting this use an application was made to the Lands Tribunal to vary them This was turned down thus dooming the cinema.The cinema was always used by the local synagogue for its High holiday services.

I worked at this theatre/cinema for a short time doing stage lighting and 1st projectionist around the late 1960’s early 1970’s Rank had just spent a small fortune redoing the rigging and stage lighting. The new dimmer board was on a platform stage left with three preset’s the fly rigging was also stage left. It was a big theatre/cinema though it did a lot of live show’s which payed there way, it was not paying it’s way as a single screen cinema. Nor would it pay it’s way as a multi screen cinema, it was just to far out of the shopping area.

I went to primary school just behind the cinema. It was also used by the Jewish community for special meetings at Yom Kippur. NB your map location actually shows the Regal at Childs Hill. Temple Fortune is north of Golders Green.

Also went to Hampstead Garden Suburb primary school behind the Odeon, from 1947. Saturday morning pictures were spent at a cinema in Finchley Central, taken by a local Mum with her daughter and other children (by bus). Then, when I was about 13/14 went to the Odeon on Sat afternoons with a couple of local lads – but only if there was a good Western being shown! Moved to Bristol, then the Midlands, finally West Sussex Channel coast. Many good cinemas have been demolished all over England, such as the Odeon, and the ABC Golders Green.

Many happy memories of the odeon going to see many films and shows there and being there for the forthy gang show in the presence of the Queen and the getting a job as a trainee projectionist swiss cottage and spending all my spare time at temple fortune I learnt a lot thanks to the chief projectionist it was a great cinema/theatre.