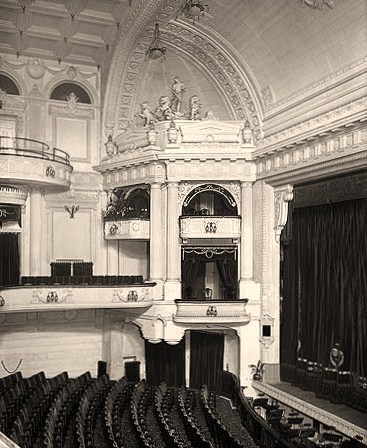 Located in north-west London, adjacent to both Golders Green tube(Underground) railway station and the bus station. The Golders Green Hippodrome Theatre opened on 26th December 1913. Designed by noted theatre architect Bertie Crewe, it had 2,245 seats which were located for 1,013 in the stalls, 564 in the circle and 668 in the upper circle.

An unusual feature of the auditorium were the stage boxes on each side of the proscenium, where the two on the upper circle level faced into the audience rather than the stage, making them virtually useless regarding sightlines. On top of the boxes are sculptors of lions drawing chariots. The proscenium is 37 feet wide and the stage is 30 feet deep. Another unusual feature was the lack of a full fly tower on the stage.

It remained a No 1 London suburban theatre for many years, and was always independently operated. It became famous as being a try-out theatre for productions prior to their London West End debut. Immediately after the outbreak of World War II in September 1939, it launched a touring production of Oscar Wilde’s “The Importance of Being Ernest” starring John Gielgud and Edith Evans, with others in the cast being Peggy Ashcroft, Margaret Rutherford and Jack Hawkins. The final stage show was performed at the Golders Green Hippodrome Theatre on 17th February 1968.

The lease on the building was purchased by the BBC and it was converted into a television studio from 1969. In 1972, the BBC converted it into a radio concert hall, and it became the BBC Concert Hall. The audience were seating in the rear stalls and the circle, with the upper circle closed and partitioned off. The BBC Concert Orchestra made the theatre their home and for many years the popular ‘Friday Night is Music Night’ programme was broadcast live, in front of a live audience.

The ageing theatre was beginning to need urgent repairs and the BBC placed the lease of the building for sale in September 2005. An orthodox Jewish group were interested to convert the building into a place of worship and another bid came from a company who wanted to use the venue for IT and media purposes. Both bids failed as the planning applications at that time stipulated the building should be retained for entertainment use. The BBC moved out of the theatre in December 2005 and it remained empty and unused until March 2007 when it was purchased by the Bradford based El-Shaddai International Christian Centre. A condition of the sale was that some live entertainment should be provided. Unfortunately that never happened and they did not take care of the building and it began to fall into a state of disrepair. In the summer of 2017 the church had vacated the building and it was ‘For Sale’.

In October 2017 plans were proposed to convert the theatre into a mosque which didn’t go down well with the local population in this mainly Jewish area. By October 2018 it was operating as a mosque. By October 2021 the Mosque had moved out and the building was taken over the Australian based Hillsong mega church.

The Hippodrome Theatre is a Grade II Listed building.

Exterior and interior photos from 2009 can be found here:–

The boxes may well have been, like the Sunderland Empire equivalents, never intended for watching the performance, but to be used as hospitality rooms where sponsors could entertain friends / clients before and after the show. They are quite large and, as pointed out above, have a terrible view of the stage.

What I remember most about the Hippodrome were the stalls, which had no aisles – just continuous curves, so it was a bit like a Mexican Wave when people with mid-stalls seats arrived at the last minute. It also has a place in the heart of balletomanes, for it was here that Anna Pavlova gave her final performance, on 13 December 1930.

It would be great to see the Hippodrome put back as a theatre for live shows and concerts as there is no big Venues in north London.